Oxford and the Dictionary

Our range of over 500 dictionaries, thesauruses, and language reference works caters for the needs of very young children up to the accomplished academic, and for speakers of different languages across the world.

❖  Dictionaries of current English for general reference and academic study

❖  Dictionaries for children and students to the age of 16, supporting different curricula and international qualifications such as the iGSCE

❖  Dictionaries for learning English – designed for learners of English as a foreign language. These are published for different countries around the world.

❖  Bilingual dictionaries for people learning and using other languages. Oxford publishes dictionaries in over 40 languages, from modern European languages to classical languages, as well as languages from around the world, including Russian, Chinese, Japanese, Gujarati, and Swahili.

❖  Dictionaries looking at different varieties of English, such as Canadian, Australian, and South African English 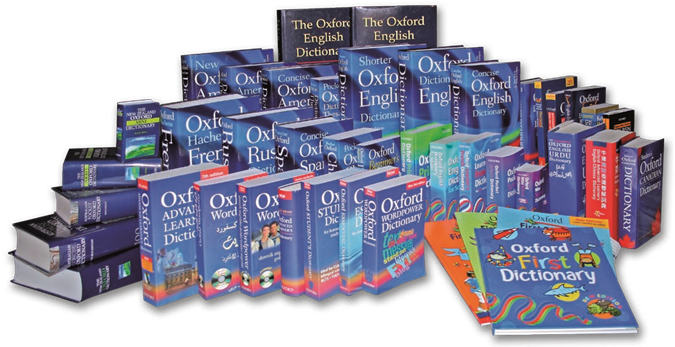 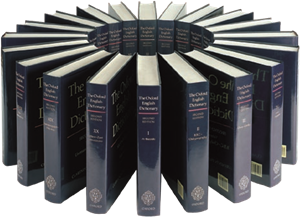 Perhaps the most famous English dictionary in the world is the Oxford English Dictionary (OED). The dictionary was the brain-child of the Philological Society of London, whose members started collecting examples of word usage for what was to become the OED in the late 1850s. In 1879 Oxford University Press agreed to take over the work, appointing an editor and

revitalizing the data collection: words and their meanings were sent to the dictionary’s office or ‘scriptorium’ by members of the public on ‘slips’, creating what was then the world’s largest paper-based corpus or word bank. The dictionary was published in instalments between 1884 and 1928, but it soon had to be expanded as new words and meanings continued to flood into the language, and so over the period 1933-86 five supplementary volumes were published. 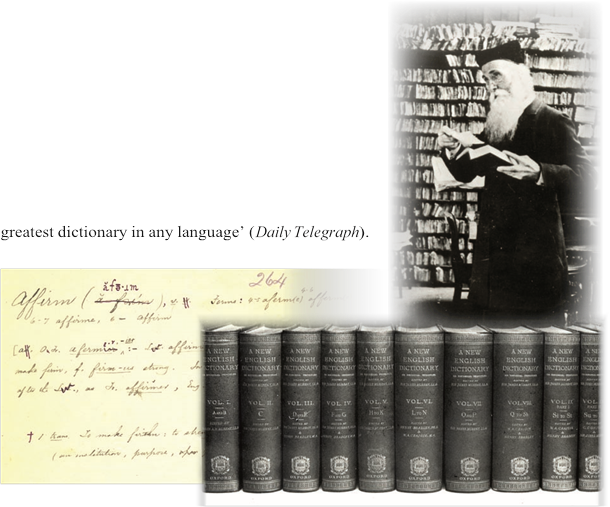 Today, the Oxford English Dictionary is the accepted authority on the evolution of the English language over the last millennium. It is an unsurpassed guide to the meaning, history, and pronunciation of over 600,000 words, both present and past. It traces the usage of words through 2.5 million quotations from a wide range of international English language sources across the English-speaking world, from classic literature and specialist periodicals to film scripts and cookery books. Entries also contain detailed etymological analysis, making the OED a unique historical record of the English language.

The Second Edition of the OED is currently available as a 20-volume print edition, on CD-ROM, and also online, where the text is now for the first time being completely revised to produce a Third Edition. Updated quarterly with some 2,500 new and revised entries, OED Online offers unparalleled access to ‘the

Dictionaries of current English for reference  and academic study

Oxford publishes an extensive range of dictionaries to meet the changing needs of dictionary users, including versions on CD-ROMs and online. The range includes dictionaries for students at college and university, dictionaries for family reference, and for use at work. The world-famous Concise Oxford English Dictionary, now in its eleventh edition, has been in print for over 90 years. 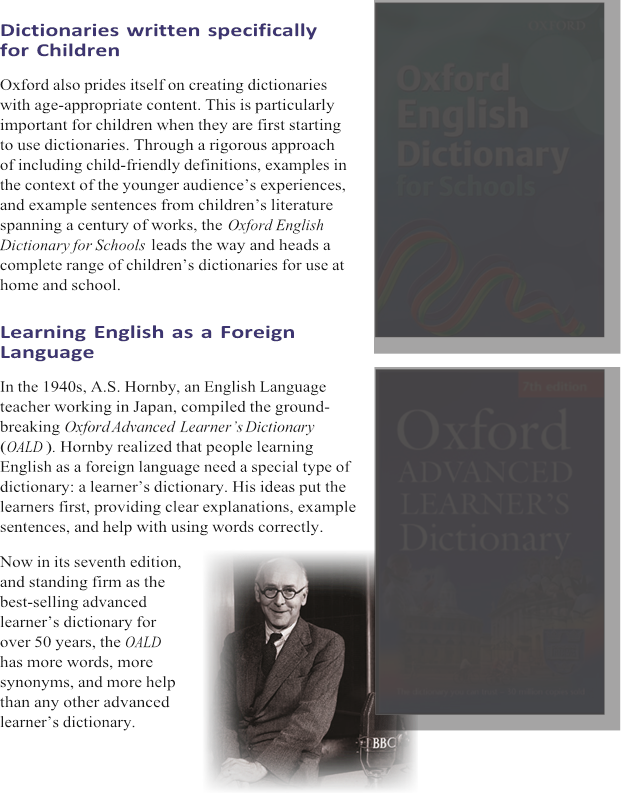 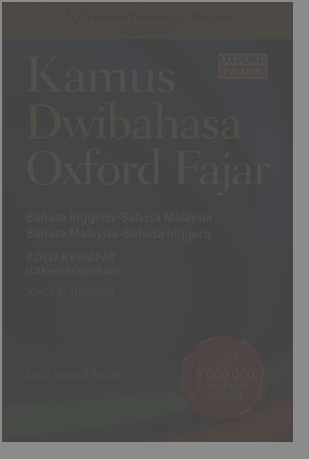 Dictionaries for different varieties of English

Oxford publishes dictionaries in a number of different countries, including:

❖  Canada – where OUP offers a range of monolingual Canadian dictionaries for the adult and school markets as well as companion thesauruses.

❖  China – for regional and international markets, OUP China publishes EnglishChinese dictionaries and a broad range of college, academic, and general titles about and for China, again both in English and in Chinese.

❖  Pakistan – where OUP offers a range of English–Urdu dictionaries for the general reader and school students. Dictionaries for Sindhi speakers are in development.

❖  Kenya and Tanzania – where Kiswahili dictionaries have been created for Primary schools and for general readers.

❖  South Africa – where a wide range of local dictionaries are available for schools and general readers. As well as monolingual local dictionaries, the new bilingual range includes dictionaries for speakers of Afrikaans, IsiXhosa, IsiZulu, Siswati, Sepedi, Sesotho, and Setswana.

What makes an Oxford Dictionary?

Dictionary in 2005 was widely celebrated, and the recent BBC television series Balderdash and Piffle had a huge response to its call to viewers to help track down elusive word and phrase origins for the OED. But how are dictionaries written today? And how do you know that what is included in a dictionary is accurate and up to date?

A corpus is a collection of texts of written (or spoken) language presented in electronic form. It provides the evidence of how language is used in real situations, from which lexicographers can write accurate and meaningful dictionary entries. The Oxford English Corpus is at the heart of dictionary-making in Oxford in the 21st century and ensures that OUP can track and record the very latest developments in language today. By analysing the corpus and using special software, we can see words in context and find out how new words and senses are emerging, as well as spotting other trends in usage, spelling, World English, and more.

The Oxford English Corpus gives us the fullest, most accurate picture of the language today. It represents all types of English, from literary novels and specialist journals to everyday newspapers and magazines as well as the language of chatrooms, emails, and weblogs. And, as English is a global language, used by an estimated one third of the world’s population, the Oxford English Corpus contains language from all parts of the world – not only from the UK and the United States but also from Australia, the Caribbean, Canada, India, Singapore, and South Africa. It is the largest English corpus of its type: the most representative slice of the English language available.

Meanings of words and phrases change and so do spellings, despite the existence of ‘standard’ or ‘correct’ spelling. A strength of the corpus is that it contains not only published works in which the text has been edited (and made to conform to standard spellings and grammar) but also unpublished and unedited writing like emails and weblogs.

The Oxford Reading Programme exists to provide Oxford lexicographers with evidence of how words are used today in the English-speaking world, and to alert them to the emergence of new words.

The programme maintains a network of voluntary and paid readers who provide editors with quotations which illustrate how words are used. Until the 1990s the quotations were kept on alphabetically filed slips of paper. Now they are entered on a searchable database called ‘Incomings’ which currently contains some 62 million words; on average, 17,000 quotations are sent in by readers every month.

The Oxford Reading Programme has its origins in the programme of reading that was started in 1857 for the Oxford English Dictionary.

The range and quality of an Oxford Dictionary is beyond compare. Whatever your language needs and abilities, Oxford University Press has a dictionary for you.

To find out more about the Oxford dictionaries available in your country, please visit your local Oxford University Press website’s Dictionary section.