Hello, everybody! We are glad to see you at our tasty, delicious, yummy Pizza Party!

Do you like pizza? What is your favourite pizza?

What do you know about pizza?

Do you know how to cook pizza?

What recipe do you know?

Today we would like to tell you about international food. 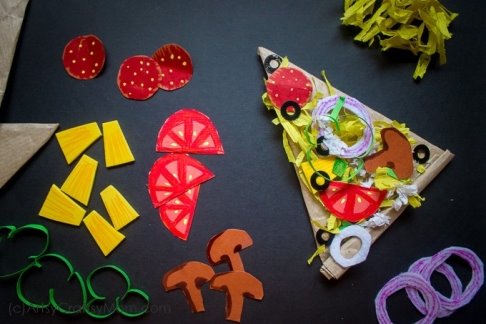 Doughnuts (one for each player) / String

Before the party tie a string onto doughnuts and hang from a line in the backyard or under a doorway.

Interesting types of foods with different smells and tastes (jars of baby food is a fun way to play!)

Players try to guess what food they are eating while blindfolded.
Blindfold players and set a bowl of a strange food item in front of them.  Baby food is a great idea and also ketchup, mustard, whipped cream, hot sauce, mayonnaise will work.  Players taste each food at the same time and the first one to call out the correct answer to what they are eating wins a point.

Mini Marshmallows / Dixie or small paper or plastic cups
Players in teams of 2 try to catch the most marshmallows in their cup.
Divide the players into teams of two.

After the time limit the team that has the most marshmallows in their cup wins!
Then play another round by reversing who throws the marshmallows and who catches them on the team.  Reload the cups before the round so that each team will have the same amount of 25 marshmallows to begin.
Variation:  This game can also be played by using dried beans or uncooked pieces of penne (or any small shaped) pasta.

Teams try to stick as many cheese balls as they can to their team mate (who's wrapped in duct tape).

Divide the guests into two teams. Each team chooses one player from their team to be the Big Cheese.  The Big Cheese will stand in the middle of their team and try to get as many cheese balls to stick to them during the time limit.

Before the game starts have each team wrap their center player in duct tape so that the sticky part of the tape faces out.  This way the cheese balls will stick to them.
After they have been wrapped in duct tape give them a pair of safety glasses or swimming goggles to protect their eyes.


This is a fun game for a birthday party for kids of all ages. Uncooked spaghetti noodles and uncooked penne pasta

On "go" the players will take the piece of uncooked spaghetti in one hand and try to thread their pieces of penne pasta onto the spaghetti noodle.
Players cannot use their other hand or any other object to help get the penne pasta pieces onto their spagetti noodle.

The first player to pick up all six pieces at the same time wins.
After one round add a few variations such as:


Players have to hold the uncooked spaghetti noodle in their mouth and thread the penne pasta without using their hands.

Wrapped candies (Hershey's kisses, Starburst) / Oven mitts
The goal of this fun birthday party game is for the players to unwrap candy in the fastest time.  The catch is that the players have to wear oven mitts while trying to unwrap the candy!

Set out several pieces of wrapped candy such as Hershey's kisses, Starbust,  or Smarties.
Each player has to wear oven mitts.

On "go" the players put on the oven mitts and try to unwrap the candies.
Give the players one minute to unwrap as many pieces of candy as they can while wearing the oven gloves.

The player with the most unwrapped candy within the one minute time limit wins!
Variation:  Instead of oven mitts substitute winter mittens or gloves.

Marshmallows
This is a funny game where players try and say "Chubby Bunny" with the most marshmallows in their mouth.

Have the players sit in a circle with a bowl of large marshmallows in the middle.
The first player puts a marshmallow in his/her mouth and says ‘chubby bunny’, then passes the marshmallows to the next player.

Place a paper plate of whipped cream on the ground in front of each player. Add five M&Ms to the top of the whipped cream just before the game commences. On the word GO, each player must get down on their hands and knees, putting their arms behind their backs, to eat the M&Ms. The first player to eat all five is the winner. This is an outdoor game because of the mess!

Each player is given a python jelly snake (it needs to be at least 30cm long). The end of the snake is held between the teeth and on the word GO, each player races to eat the entire snake without using their hands or dropping it to the ground. The first player to have an empty mouth is the winner.

You'll need a blindfold and different kinds of edible food. Divide into two teams.
You blind fold one person from each team and let them smell and touch the food while their team yells out clues for them to guess what the item is.
The team with the most correct guesses wins.

Cook a few cans of peas. Spoon 20 peas on several plates. Put plates on a large table. Place an empty plastic cup and drinking straw beside each plate. Have a teen sit in front of a plate. On the word "Go," the teen must use nothing but the drinking straw to transfer all 20 peas on the plate to the cup. The first teen to transfer all the peas to the cup wins the game.

To play the pasta relay, divide players into two teams. Have the teams line up behind two empty pots at one end of the room. At the opposite end of the room, place two pots filled with dried pasta. Give each team a ladle. On the word, “go,” the first players in line must race with their ladles to the pots filled with pasta, scoop out as much pasta as they can, and run back and dump it into the empty pot. The ladles then get passed to their teammates, who must do the same. The first team to transfer all of the pasta from one pot to the other wins the race.

Another fun cooking party idea is to play this game bucket-brigade style. Have teams form a line that extends from one pot to the other. Each player gets a ladle. At the start of the game, the players next to the full pot scoop out a ladle of pasta and pour it into the ladle of the player next to them. The transferring of pasta from ladle to ladle continues down the line until the last player dumps his pasta into the pot. The first team to fill their empty pot in this manner wins the race.

Divide your party guests into teams. Give each team a recipe that you have printed with scrambled words for the ingredients and instructions. Teams have to unscramble the words and put the recipe in the right order. Once they can read their recipes, they must collect and prepare their ingredients according to the instructions. The first team to prepare their dish wins.

Give players a chance to dress like a chef with this fast-paced relay race. Divide players into two teams. Give each team a chef’s hat, an apron and a pair of oven mitts. Have the first player in line for each team put on the chef’s outfit, then quickly take it off and pass it to the next player in line. The next player must repeat the task of putting on and taking off the chef’s clothing. As the chef’s clothing is passed down the line, each player must do the same. When the last player in line has donned and removed the chef costume, he must return it to the player who started it all. The first team to have its first player wear the chef’s outfit a second time wins the race.