Урок "Are we really civilised?"

Theme: Are we really civilised?

1. Theme and lesson objectives: We live in the 21st century. It’s the 3rd Millenium – the period of the new world’s history. We have studied a lot about ancient civilisations. But the question that has been often disputed is: Are we really civilised? Has our modern  society managed to use beneficially all the technological and cultural heritage got from the past generations to have the right to be called civilised? 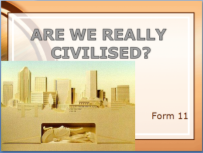 Please, open your exercise-books, write down the

date, classwork and our today’s topic. 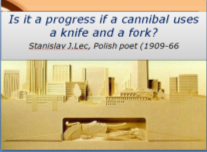 At our today’s lesson we are going to answer such

a problematic question asked by the famous

Polish poet Stanislav Lec “Is it a progress if a

cannibal uses a knife and a fork?”

Write it down into your exercise-books? Because   we are going to return to it at the end of the lesson as the answer to it is not very easy and should be given after the thorough study of the history development and the focus on both ancient and modern civilizations.

2. Eliciting.  When you hear the word “civilization” what words do you usually associate with it? (making a mind-map)

1. Work on the vocabulary. At home you worked with the key words of Ex.1 p.122 and had to classify them into three headings. Let’s check the results: 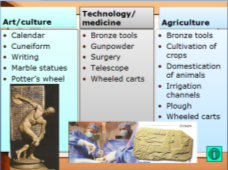 Which of these words do you see in the pictures

words as some of them are quite difficult (ppt).

Which of these ancient inventions do you consider the

most important for the world development? And why?

As you see all of these things were developed in ancient times but do you know with what ancient civilization they are connected? – Mesopotamia (which means the land between two rivers) – one of the first civilizations that made a huge influence on mankind’s development. Try to complete the factfile of Mesopotamia in Ex.3 p.122

Now you’re going to listen to this TV program once more and answer the multiple choice questions in Ex. 5 p.122 but first look through the questions and make sure you understand everything. (CD #15 – 2,30 min) Control as a whole class.

What was the most interesting piece

of information for you?

As we have said Mesopotamia was situated in what is now Iraq. Irene Dibrova has prepared a short presentation about Iraq for you. While listening think what civilization would you like to choose for living in (ancient of Mesopotamia or the present of Iraq) if you had such a chance? (student’s presentation+discussion)

As you see people do not always agree if we are civilized or not. So you have to listen to another extract from the TV series (in Ex.6 p.122) and decide which of the people interviewed think we are civilized and which do not think so. Which reasons do they give?

Write “yes / no” and the corresponding letter of the reason.

- Ex.7 p.123 – Work in pair and underline the words and expressions in the Function File people use to give reasons and examples. Control as a whole class+writing down. 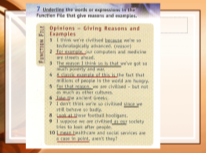 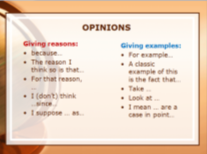 or examples and then agree or disagree

Is it a progress if a cannibal uses a knife and a fork?”

How do you understand this quotation? Do we have the right to be called civilized when we have so many problems causing people’s deaths because of incurable diseases, poverty, hunger, homelessness, drugs, violence and war conflicts? 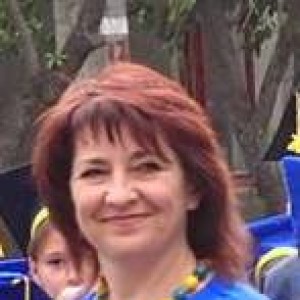