Про матеріал
The objectives are: - to train using of the lexical material on the topic; - to train and practise using of question forms; - to teach students to express their opinion; - to develop pupils’ knowledge, logical thinking; - to improve reading, writing, speaking, listening comprehension skills through doing lots of tasks; - by the end of the lesson students will revise the material about t the UK.
Перегляд файлу

T: Good day my dear children! Today we shall travel to one of European countries and you’ve already known some facts about it, its people and the capital of this country. So, our task today is to revise what we know about…? Yes, you are right- Great Britain.

T: You can see the map on the blackboard, do you know what it is.

T: Yes, I‘d like to begin our lesson with recollecting general information of this country. Answer my questions please:

4. What is the population of Great Britain?

III. Checking up the home task:

T: Your homework for today was Ex.4 p.27. Please open your workbooks and show me your h/w. Who wants to go to the blackboard and write the exercise? All the others check your answers.

T: Dear children, now let’s have a trip to this beautiful country.

Pre-reading task: presentation of new words and geographical names on the topic

This is the United Kingdom of Great Britain and Northern Ireland. It is situated in the north- west coast of Europe between the Atlantic Ocean on the north and north west and the North Sea on the east. The UK consists of 4 parts. They are: England, Scotland, Wales and Northern Ireland. The UK lies on the British Isles. The UK is one of the smallest countries in the world. It is twice smaller than France or Spain. The area of the UK is some 244.100 square kilometers. The population of Great Britain is over 61 million. Great Britain is not rich in mineral recourses. Coal and oil are the most of them. The UK is one of the most industrialized countries. Agriculture takes also an important sector in the economy of the country. It isn’t too hot in summer or too cold in winter. It often rains in England. The longest rivers are the Thames and the Severn. The UK is a constitutional monarchy. The Queen Elizabeth the II is officially the head of the state. The formal name of the British national flag is Union Flag, but it is commonly known as the Union Jack.

The west coast is washed by the Atlantic Ocean and the Irish Sea, its east coast – by the North Sea, and the south coast – by the English Channel, the narrower part of which is called the Strait of Dover.

Mountains are an important part of the geography of the country. The British Isles have no high mountains. Scotland is a mountainous country, especially in the north. Here the main chain of mountains is called the Grampians and its highest peak is Ben Nevis, which is 4,400 feet high and is the highest peak in Britain. In the north we can see the Cheviot Hills, separating England from Scotland . In England the Pennine Chain runs down from the north through the centre. In Wales there are the Cumbrian Mountains, the highest peak of which is Snowdown, 3,000 feet high. The Cumbrian Mountains are famous for the number and beauty of their lakes, this part of the country is called the Lake District. The largest lakes in Scotland are Loch Lomond and Loch Ness.

The British Isles have many rivers, but they are not very long. The longest of the English rivers is the Severn. The Thames flows through rich agricultural and industrial districts. Scotland’s most important river is the Clyde, on which stands Glasgow. Many of the English and Scottish rivers are joined by canals, so that it is possible to travel by water from one end of Great Britain to the other.

There are no great forests in the British Isles today. Historically, the most famous forest is Sherwood Forest. It was the home of Robin Hood.

The climate of the British Isles is generally mild, not very cold in winter and never hot in summer.

The mild and damp climate in the British Isles is very good for agriculture, especially for vegetable-farming, sheep and cattle-farming. Great Britain is more an industrial than an agricultural country. Britain is rich in coal, iron, gas, marble, granite, slate, lead, tin, copper, zinc and salt. Next to coal and iron the main minerals found in Great Britain are marble, granite, slate, lead, tin, copper, zinc, salt and china-clay. Gas is found in the North Sea. London, Liverpool and Glasgow are the biggest English ports, Manchester, Birmingham, Edingburgh are main industrial centres. Oxford and Cambridge are main university towns.

Discussion of the text:

1.What is the official name of the country we call Great Britain?
2. Is United Kingdom situated on the mainland?
3. What is the highest mountain?
4. What is the Strait of Dover?
5. What are the British Isles washed by?
6. Are there any rivers in that region?
7. What are main ports of Britain?

8. What kind of climate does Great Britain have?
9. What are the main rivers and lakes?

11. What are the main natural resources?

T: Well, now it’s a high time for listening task. You will see and hear the story about Great Britain in Present Simple Passive Voice. After that you should answer the questions. Hope you will do everything correctly.

Do you know geography of Great Britain well?
Passive voice

2.How are Ireland and Great Britain separated?
They are separated by the Irish sea.

4.What is The UK washed by in the West?
The UK is washed by the Atlantic Ocean.

5.Where is Scotland situated?
Scotland is situated in the Northern part of Great Britain

6.Where is Wales situated?
Wales is situated in the South Eastern Part of Great Britain

T: And now open the brackets to write the correct forms of Present Tense.

Pupils, open your day-books and write down your home task: Ex2. p.41. You should fill in the gaps with Present Simple Pasive forms. Do you understand what you should do?

T: What kind of lesson was today? (bad, good, scientific, interesting) Did you like this lesson? What was interesting or boring? Thank you very much. Our lesson is over! Good-bye! 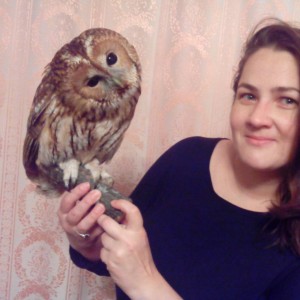