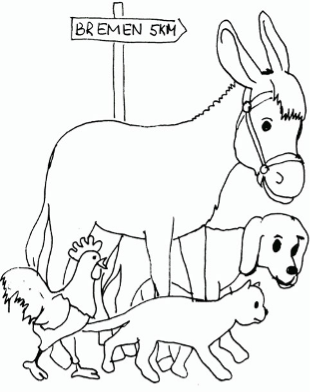 A man had a donkey, who for long years had untiringly carried sacks to the mill, but whose strength was now failing, so that he was becoming less and less able to work. Then his master thought that he would no longer feed him, but the donkey noticed that it was not a good wind that was blowing and ran away, setting forth on the road to Bremen, where he thought he could become a town musician. When he had gone a little way he found a hunting dog lying in the road, who was panting like one who had run himself tired.

"Why are you panting so, Grab-Hold?" asked the donkey.

"Oh," said the dog, "because I am old and am getting weaker every day and can no longer go hunting, my master wanted to kill me, so I ran off; but now how should I earn my bread?"

"Do you know what," said the donkey, "I am going to Bremen and am going to become a town musician there. Come along and take up music too. I'll play the lute, and you can beat the drums."

The dog was satisfied with that, and they went further. It didn't take long, before they came to a cat sitting by the side of the road and making a face like three days of rainy weather. "What has crossed you, old Beard-Licker?" said the donkey.

"Oh," answered the cat, "who can be cheerful when his neck is at risk? I am getting on in years, and my teeth are getting dull, so I would rather sit behind the stove and purr than to chase around after mice. Therefore my mistress wanted to drown me, but I took off. Now good advice is scarce. Where should I go?"

"Come with us to Bremen. After all, you understand night music. You can become a town musician there." The cat agreed and went along.

Then the three refugees came to a farmyard, and the rooster of the house was sitting on the gate crying with all his might.

"Your cries pierce one's marrow and bone," said the donkey. "What are you up to?"

"I just prophesied good weather," said the rooster, "because it is Our Dear Lady's Day, when she washes the Christ Child's shirts and wants to dry them; but because Sunday guests are coming tomorrow, the lady of the house has no mercy and told the cook that she wants to eat me tomorrow in the soup, so I am supposed to let them cut off my head this evening. Now I am going to cry at the top of my voice as long as I can."

"Hey now, Red-Head," said the donkey, "instead come away with us. We're going to Bremen. You can always find something better than death. You have a good voice, and when we make music together, it will be very pleasing."

The rooster was happy with the proposal, and all four went off together. However, they could not reach the city of Bremen in one day, and in the evening they came into a forest, where they would spend the night. The donkey and the dog lay down under a big tree, but the cat and the rooster took to the branches. The rooster flew right to the top, where it was safest for him. Before falling asleep he looked around once again in all four directions, and he thought that he saw a little spark burning in the distance. He hollered to his companions, that there must be a house not too far away, for a light was shining. 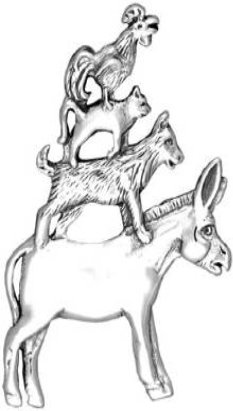 The donkey said, "Then we must get up and go there, because the lodging here is poor." The dog said that he could do well with a few bones with a little meat on them. Thus they set forth toward the place where the light was, and they soon saw it glistening more brightly, and it became larger and larger, until they came to the front of a brightly lit robbers' house.

The donkey, the largest of them, approached the window and looked in.

"What do you see, Gray-Horse?" asked the rooster.

"What do I see?" answered the donkey. "A table set with good things to eat and drink, and robbers sitting there enjoying themselves."

"That would be something for us," said the rooster.

Then the animals discussed how they might drive the robbers away, and at last they came upon a plan. The donkey was to stand with his front feet on the window, the dog to jump on the donkey's back, the cat to climb onto the dog, and finally the rooster would fly up and sit on the cat's head. When they had done that, at a signal they began to make their music all together. The donkey brayed, the dog barked, the cat meowed and the rooster crowed. Then they crashed through the window into the room, shattering the panes.

The robbers jumped up at the terrible bellowing, thinking that a ghost was coming in, and fled in great fear out into the woods. Then the four companions seated themselves at the table and freely partook of the leftovers, eating as if they would get nothing more for four weeks.

When the four minstrels were finished, they put out the light and looked for a place to sleep, each according to his nature and his desire. The donkey lay down on the manure pile, the dog behind the door, the cat on the hearth next to the warm ashes, and the rooster sat on the beam of the roof. Because they were tired from their long journey, they soon fell asleep.

When midnight had passed and the robbers saw from the distance that the light was no longer burning in the house, and everything appeared to be quiet, the captain said, "We shouldn't have let ourselves be chased off," and he told one of them to go back and investigate the house. The one they sent found everything still, and went into the kitchen to strike a light. He mistook the cat's glowing, fiery eyes for live coals, and held a sulfur match next to them, so that it would catch fire. But the cat didn't think this was funny and jumped into his face, spitting, and scratching.

He was terribly frightened and ran toward the back door, but the dog, who was lying there, jumped up and bit him in the leg. When he ran across the yard past the manure pile, the donkey gave him a healthy blow with his hind foot, and the rooster, who had been awakened from his sleep by the noise and was now alert, cried down from the beam, "Cock-a-doodle-doo!" 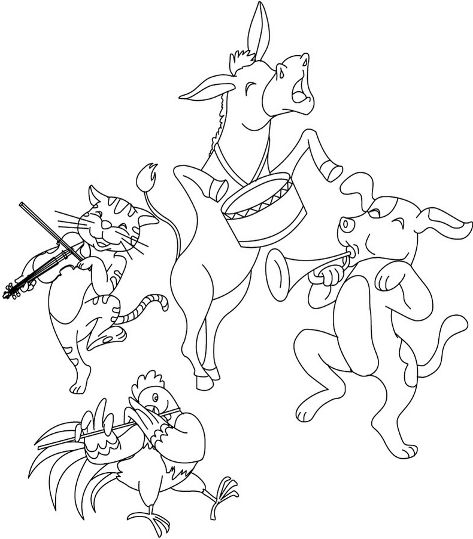 Then the robber ran as fast as he could back to his captain and said, "Oh, there is a horrible witch sitting in the house, she blew at me and scratched my face with her long fingers. And there is a man with a knife standing in front of the door, and he stabbed me in the leg. And a black monster is lying in the yard, and it struck at me with a wooden club. And the judge is sitting up there on the roof, and he was calling out, 'Bring the rascal here. Then I did what I could to get away."

From that time forth, the robbers did not dare go back into the house. However, the four Bremen Musicians liked it so well there, that they never left it again. And the person who just told that, his mouth is still warm.

Who offered every poor animal to take off to Bremen?

Why did all animals leave their homes and their masters?

Where did each of the main characters place himself for a night?

Did the robbers dare to come in their house after the terrible night?

Yes, the donkey was weak.

The dog was panting hard on the road

The cat ran away because his mistress wanted to drown him

The refugees met the rooster on the farmyard

First they stopped in the forest (not in the robbers’ house)

The rascals ran away of the house when they heard the terrible sounds.

No, he didn’t. The robber mistook the donkey for the black monster.(not for the man with a knife)

The four animals are the Bremen musicians.