ВЕ PROUD TO BE UKRAINIАN

Objectives: to practice the vocabulary on the topic; to develop students’ skills in reading, listening, speaking; to widen pupils’ knowledge and outlook on Ukrainian history and culture.

Ukraine: the place where beauty, intellect and courage are coming together now. Our Motherland is really beautiful, astonishing and marvelous. And we love it.

Divide students into pairs and ask them to write as many words that associate with Ukraine as they can in two minutes. Give them stripes of yellow and blue paper to write on.

Collect answers on the board and discuss them.

Introducing the topic and the lesson objectives

T. The theme of the lesson is`ВЕ PROUD TO BE A UKRAINIАN`. Today we’ll speak about things we have to be proud of in our country, we’ll practice our reading, listening and speaking skills. By the end of the lesson you’ll get to know some new information and you’ll be able to tell a lot about Ukraine.

II. MAIN PART OF THE LESSON

T. Look at the pictures. Are they familiar to you?

Ex.1. Read the text quickly and identify the pictures: 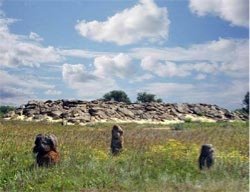 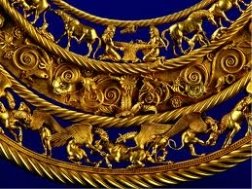 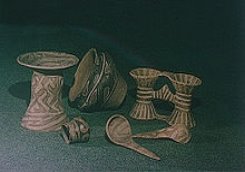 Ukraine is a very young country as it regained its independence only 23 years ago (1991), But our ancestors lived on these lands for thousands of years and left us a very rich heritage.

Ex.2. Match the highlighted words in the text with the definition.

Ex.3. Complete the text with the correct words.

Ex.4. Listen to five facts that Ukrainians can be proud of and match them to five titles:

1. The first constitution in the world was created by Ukrainian hetman Pylyp Orlyk. It absorbed the best traditions of European law, and told Ukrainians about who was right, who advised and who judged.

2. Ukraine, the first post-Soviet country, was honored to take one of the four most prestigious sporting events in the world - the European Football Championship.

3. Unique in its composition black earth – Ukrainian soil, which cannot be created artificially, is famous among farmers throughout the world as the best environment for any crop.

4. Scientists from Ukraine first in the Soviet Union split the atom, invented a detonator for a nuclear bomb, and now take part in experiments at the Large Hadron Collider.

5. Ukrainian borsch, dumplings, chicken Kiev and banosh - became the feature of the country and inspire chefs from all over the world to create new dishes.

Ex.5. Decide whether the information in each sentence true or false, then listen and check.

2. Ivan Franko is the author of the first Ukrainian detective novels.

3. Ivan Pului is one of the discoverers of X-Rays.

4. Illya Mechnikov is the Nobel Prize Winner in Physiology and Medicine.

5. Igor Sikorsky is the inventor of the helicopter.

6. Sergey Korolev is a rocket designer.

7. Kazimir Malevich, the author of `The Black Square` was born in Kyiv.

8. Both Steven Spielberg’s granddads are from Ukraine.

T.    Yes, you’re right, all these facts are true. I’m so proud to live in Ukraine. And now it is the time for the task which I want you to do most of all.

Ex.5. Work in pairs. Think of three things you’re really proud of in your country. Make notes. Then tell the class your opinion.

T. What did you learn today? What can you do now?

Make a group project on the topic `TEN GOOD REASONS TO BE PROUD OF UKRAINE`. If you wish, you may use such categories as: HISTORY, NATURE, ARCHITECTURE, CUISINE, TRADITIONS, CRAFTS, CULTURE, SCIENCE, SPORTS, PEOPLE.