for students of the 6-9th grades.

Learning outcomes by the end of the lesson the students will be able :

Speaker1: We’ve gathered today to talk about one of the holidays in the calendar of the United States of America.There is one day a year when all Americans stay at home with their families and celebrate it with dinners. This day is the fourth Thursday in November, it is called Thanksgiving Day. It is a public holiday and on this day Americans give thanks to God, Our Lord, for all the blessings they have enjoyed during the year. Look at this family, sitting at the table, talking to each other. ( American family has gathered for Thanksgiving dinner, laid the table.) 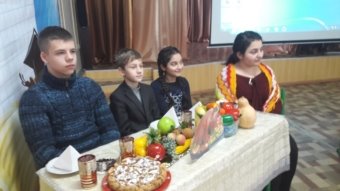 Mother: I’m so happy that you’ve gathered at last! Today is a blessing day, Thanksgiving Day, and it’s pleasant of you to leave your deals and problems come to see each other.

Daughter: Oh, Mum, you’ve prepared so many tasty dishes for this holiday. I can’t help tasting all of them!

Mother:    But, at first, I’d like you to name some words, which are associated  with this holiday.

Daughter: The Pilgrims. It seems to me, they were deeply religious English рeople, who travelled to America to find religious freedom.

Son:          Voyage. Their voyage was very dangerous across the Atlantic Ocean.

Mother: Yes, my dear, they had been sailing for 65 days.

Daughter: Let me think! Indians. When the Pilgrims arrived, they didn’t any

food, but Indians helped them survive.

Mother:    You’re well done! Now listen about  these dishes. This is Pumpkin pie. As far as  Thanksgiving dessert is considered pumpkin pie and pecan pie are two of the most popular desserts across the country. There are other desserts that are also popular like mince pie, pound cakes, apple pies and more.

Daughter: Dad, Have you tasted that mashed potatoes?

Children: Thank you, Dad and Mum!

Daughter : But What about the history of this holiday?

Mother: I think, It’s time to watch the film about the history of this holiday.

Speaker2:  The beginning of this holiday goes down to the years of early colonization. The pilgrims celebrated the first Thanksgiving Day in the fall of 1621. The pilgrims sailed to America from Plymouth, England, in September 1620. They were called Puritans and came to America for religious freedom. The name of their ship was the “Mayflower”. There were 102 passengers on board.The voyage was very difficult. Many people fell ill, some of them died. The Atlantic Ocean was very stormy. The Mayflower began to shake and leak. The people were afraid that they could not cross the ocean. They put all their trust in God, and after 65 days of a long and terrible struggle with the sea and diseases the ship landed at Plymouth Rock, in what is now the state of Massachusetts.

Speaker1  The Pilgrim Fathers established their colony but they were not ready to meet all the difficulties of life on the new continent in the wilderness. They had arrived too late to grow many crops. So they didn’t have much fresh food. The climate was very harsh. People suffered very much during the first winter. Hard work, diseases, bitterly cold weather, bad food killed about half of them. By the end of this terrible first winter only about 50 colonists remained alive. Now look at this poor family !( Poor family are sitting at the table, that is almost empty). 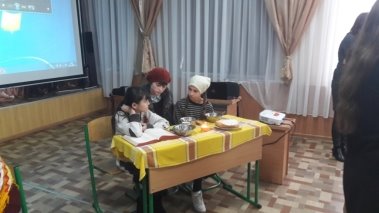 Daughter1: Oh, Mum, We’re so hungry! Have we got anything to eat! Please! Please !

Daughter2: Mum, maybe, we’ve got some beans or corns to eat. Don’t make us suffer !

Mother: Oh, my dear daughters! Sorry, but  we haven’t got anything to eat.This year the harvest was poor, corns and pumpkins haven’t grown. Unfortunately, we have no food. If I had it, I would give you. The only thing we can do is to pray the God.

Speaker1:. The following spring the Indians taught the pilgrims how to hunt, fish, plant, and survive in America. This help was very important and because of it the colonists raised good crops and had a great harvest in the fall of 1621. So they decided to thank God for His kindness to them and to celebrate it with a Thanksgiving feast. They invited their Indian friends to share this feast. The white women prepared many tasty dishes from turkey, corn, cranberries, squash and pumpkins. The celebration continued for three days. On the first day the people spent most of the time eating. On the second and third days they had different competitions, sang songs and danced. It was a wonderful holiday.

Speaker2:  Since then it became a tradition to celebrate Thanksgiving Day in the USA. Many traditions come from the early celebrations. One of them is to serve turkey for the Thanksgiving dinner. Squash and corn are also served today. Pumpkin pie is a traditional Thanksgiving dessert.

Speaker1:  Now, it’s your turn , pupils, to do some tasks

Speaker 2: Now We are going to hand out Thanksgiving cards and we want you to write  your “thanks” for everything you have and put them in our basket. 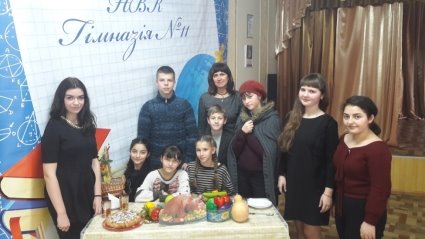