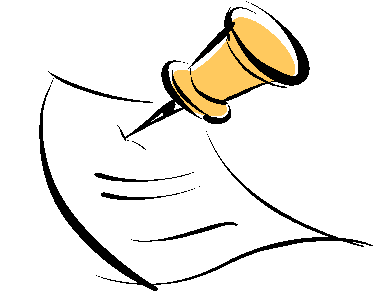 Teacher: Good-morning, everybody. Glad to see you. 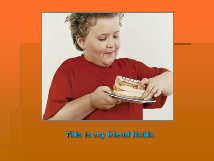 I want to introduce my friend Robin to you. He’s got a great problem. What do you think, what problem has he got? (учні висловлюють думки щодо можливої проблеми Робіна)  Read about it.  ( слайд 3) 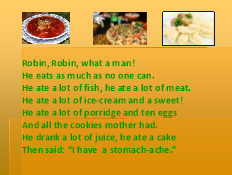 Robin, Robin, what a man!

He eats as much as no one can.

He ate a lot of ice-cream and a sweet!

He ate a lot of porridge and ten eggs

He drank a lot of juice, he ate a cake

What did poor Robin do wrong?

Pupil: He ate too much different food; his problem is overeating, that’s why he has put too much weight. 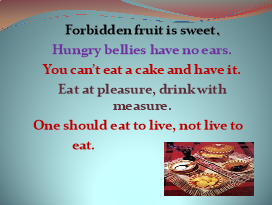 T.: Look at these proverbs. Read then aloud. Do you understand their  meaning ?

Which of them is a good piece of advice for our Robin?

P1: I suppose “Eat at pleasure, drink with measure” is a good piece of advice for him. One should eat and drink as much as our body needs. Only then he will feel well and healthy. Sure, “measure” can be different for different people. But Robin is grown-up enough to feel that it’s time to stop.

P2:  In my opinion a good tip for Robin is the saying: “ One should eat to live, not live to eat.” Eating should not be the main purpose of  life. There is nothing bad in eating much and tasty, but overeating shouldn’t bring one to the hospital. No one should be as  fat as Robin is.

T.:I fully agree with you. I understand it’s difficult to give up any bad habit including overeating.  I want to draw your attention to the words said by Henry Davia: “Every man is the builder of a temple called his body.” ( слайд 5) 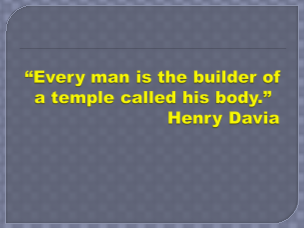 Sure, there are  many other factors which influence a state of our body, but healthy eating is one of them.

I know you have learnt  much about eating traditions of the British and Ukrainian people. Look at these people. What do they have in common with our Robin?  ( слайд 6) 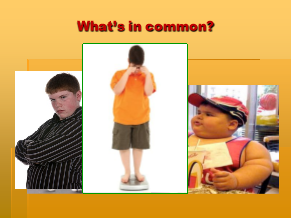 Yes, they all are rather fat. They say mankind is getting  fatter and  fatter with every coming year. Today we’ll try to touch the problem which is common for American, British, Ukrainian people. They all eat too much junk food.  ( слайд 7) 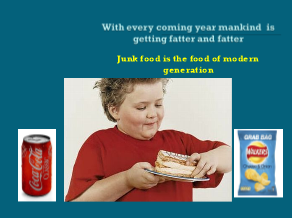 They say, junk food is the food of modern generation , its passion and sorrow. So today we’ll speak about junk food. 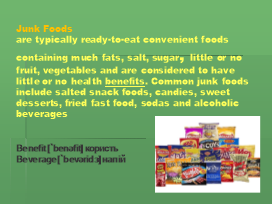 To make sure you understand what is meant we’ll do the following exercise. Divide all food items into 2 groups: healthy food and junk food: ( слайд 9) 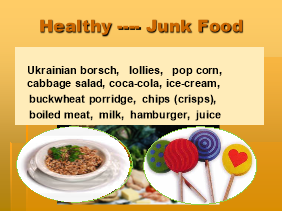 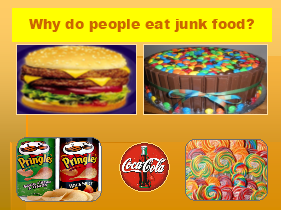 I see, all of you have done it correctly. You realize junk food is not healthy. What food items do you like more? Why?  Why do people  like to eat junk food?

P1: Nowadays, many people are too busy to pay attention to their health and appearance. They have too much work to do and too much things to do in their spare time, that is why they usually do not have time to think of what they eat and where they eat. Some people even tend to order the contents of their refrigerators on-line from supermarkets and grocery shops, some buy prepared food in cafes and restaurants. They don’t  have  time to cook themselves.

P2: Our life is very tense and fast. Sometimes a person has no time to have a complete dinner or breakfast. The only way out is to have a snack on the way to work or while going on business during the day. Junk  food  is perfect for quick eating.

P3: In my opinion junk food is rather tasty. That’s why we like to eat hot dogs, hamburgers, crisps and drink cola. It also smells well. We get used eating such food and can’t imagine our life without it.

P4:    Young people and kids eat junk food because it looks very attractive, the package is very bright and catches an eye. As for me , I usually pay much attention to the package.

Besides, the colour of the food itself is very attractive,  it smells well. A teenager can’t pass a shop without buying something tasty.

P5: Young people are greatly influenced by the advertisement. If one sees crisps or cola advertising  5-8 times a day, he or she is sure to buy it next day.

P6: In my opinion people eat junk food because all around them eat it: classmates, colleagues, friends, relatives. They may think: Why shouldn’t I if everybody can..? 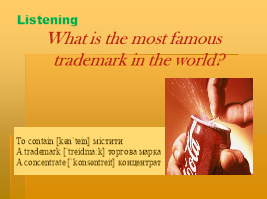 Millions of tons of junk food are sold in the world every day. Junk food trademarks have become the most successful. Do you know what  the most famous trademark in the world is? There are many legends about the history of  its creation. This is one of them.

Before listening mind some unknown words:

The story of Coca-cola

Its  story began in Atlanta, Georgia in 1886. John Pemberton invented a new drink that contained the South American coca leaf and the African cola nut. But the inventor couldn’t think of a good name for the new drink. His partner proposed name of  Coca-Cola and wrote the name in a special way – and that became the famous trademark.

For many years the company made only Coca-Cola. Then they produced new drinks – Fanta,  Sprite and TAB – in the 1960, and the Diet Coke in 1982.

The recipe of the drink is a secret. The taste of Coca-Cola is the same in any place of the world. These drinks are produced in many foreign and Ukrainian cities, too. Though Coca-Cola and other drinks are produced everywhere in the world the receipt is known only to few people in America. They supply special concentrate to their partners. That is why it tastes the same everywhere in the world.

In 1985 the company changed the recipe! But the public was very unhappy! Soon the company brought back the original recipe .

Today they sell Coca-Cola in 195 countries. Hundreds of millions of people drink it every day. It has become the most famous trademark in the world.

Put the  events in the logical order.

Making a conclusion about reasons for eating junk food I want to  mention the psychologists’ poiпt now view on the problem: 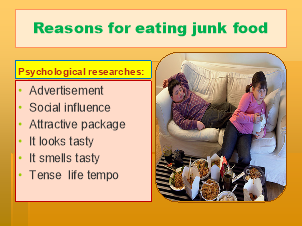 interesting  information about the famous trademark.  Have you ever tasted coca-cola (eaten a hamburger, chips)? How often do you eat chips?  What’s your parents’  attitude towards junk food?  ( слайд 14) 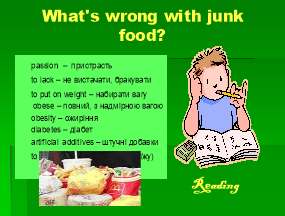 I see, your parents are against your eating junk food very often. Why? What is wrong with junk food then? Let’s learn it from the text.

Before reading mind some new vocabulary:

heading  to every part of it. One heading should be extra:

What is wrong with junk food?

Eating junk food and fast food is a great all-American passion. American kids and grownups love their candy bars, Big Macs and fries, ice cream bars. Have you ever enjoyed a hamburger, sitting on a lawn? May be you're against all these hot dogs and cheeseburgers, because it's a junk food. Anyway such food is attractive and really makes our life more comfortable and more pleasant, especially outdoors, don't they?

Junk foods such as hamburgers, pizza, fried chicken and chips usually contain many saturated fats. Too much saturated fat in the diet will cause people to put on weight and get fat or obese (very fat). Being overweight is a risk to the health of the heart and can cause other diseases.

Soft drinks, cordials, biscuits, cakes and lollies all have loads of sugar. That's what makes them taste so good! But too much sugar makes people fat, is bad for the blood and may cause other diseases.

Since junk food is too rich  in fats and sugar, it is responsible for obesity, dental cavities, diabetes and heart diseases.

One more peculiarity of fast food is that it is digested very fast, especially if washed down with cola or any other sparkling drink. It means that an hour or two after you eat this  food, you will feel hungry  again. So you will get extra fat much faster than you can even imagine.

Many parents have already known: Junk foods – loaded with artificial food colours and additives  – cause  problems in children behavior .

The children were given a test drink with artificial additives. The research found a large number of children became more inattentive, impulsive and hyperactive.  In England, where the study was conducted, people wanted to ban junk food in schools because it can lead to reading, learning by heart  and other problems at school.

A cordial [ 'ko:diəl ]  -  fruit-flavoured drink that one can  mix with water

T.: At the beginning of the lesson we defined some reasons for eating junk food. 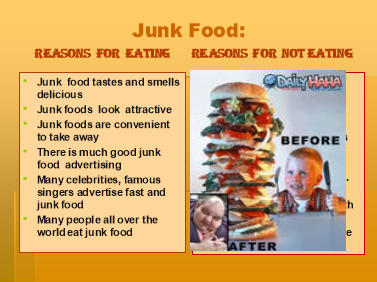 Now let’s define the reasons for not eating junk food.

- There is no vitamins, minerals …in junk food.

- It contains too much sugar and fat

- Too much junk food causes obesity.

Now look at the board. A young boy has a problem: what to choose –

an apple or a package of chips. What would you choose if you were him? Start like this:   If I were him…

Make your choice by taking  “an apple “ or “ a hamburger” , explain your choice in a written form on these so called food items. 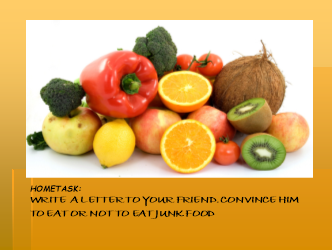 Look at the board. You can see  an empty page. Here should be a conclusion. I don’t want to make it. I want you to make this conclusion. It’s up to you to decide if you want to look like this…( slide 19) 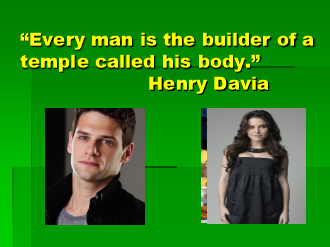 or like this … or may be like this.  I want to draw your attention to the words we said at the beginning : “Every man is a builder of a temple called his body.” Really your life is in your hands, you should live here and now, because it’s your life.

“It’s my life” says Bon Jovi in his song. Enjoy it. While listening fill in the missing words from the box:

The lesson is almost over. What did you like at the lesson? What didn’t you like? Take a microphone. Say some words and pass it to your friend. 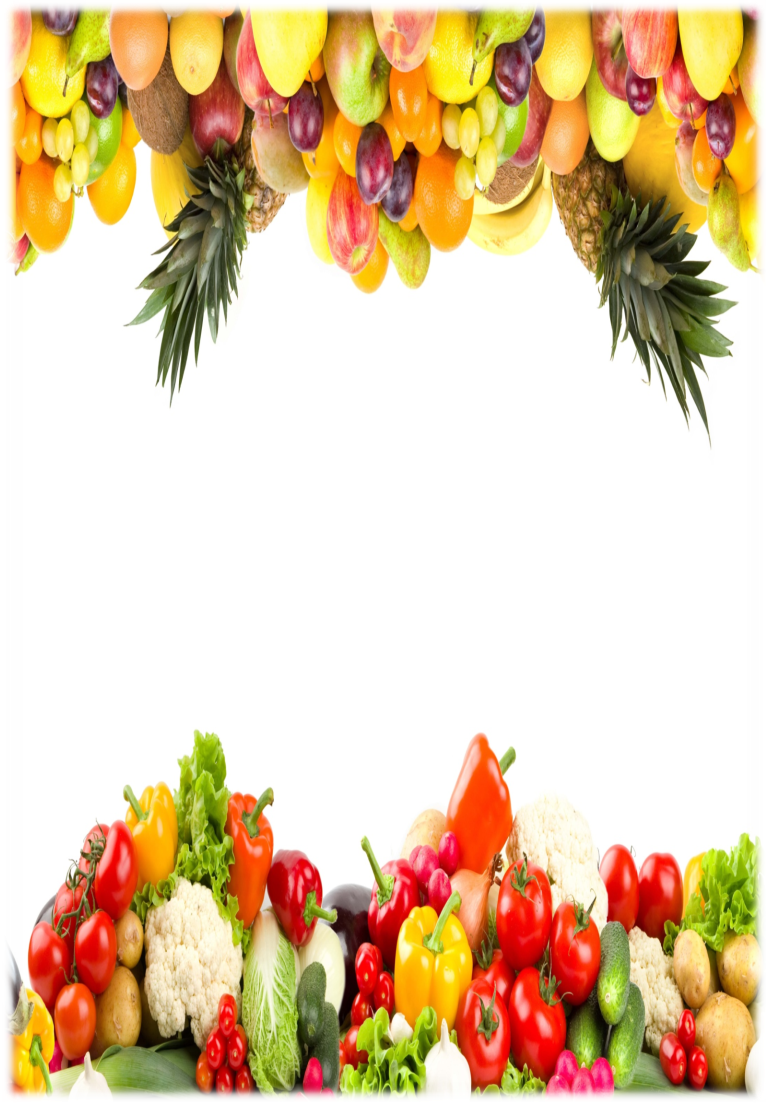 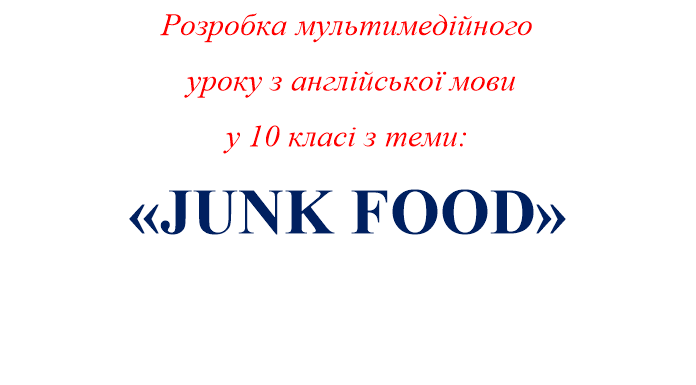 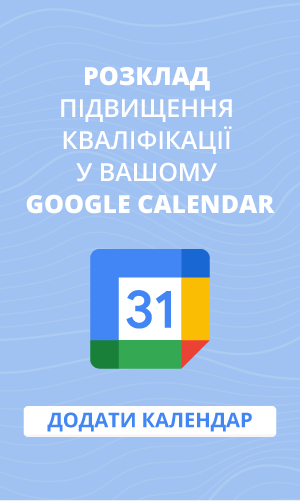