"Magic land of fairy tales'' is a creative task that enables kids to build, illustrate and share their own stories with friends, parents using colourful shapes to build scenes and characters... My students wrote their fictional narratives using StoryJumper. They loved the illustration feature and the fact that they could include themselves in the story.

”Magic land of fairy tales’’ is a creative task  that enables kids to build, illustrate and share their own stories with friends , parents  using colorful shapes to build scenes and characters... My students wrote their fictional narratives using StoryJumper. They loved the illustration feature and the fact that they could include themselves in the story.

Have you ever imagined yourself being at home alone? It seems to be an amazing thing! You can do everything you want to do... Isn't that wonderful? But soon become very bored and you feel sad and lonely. One day, I stayed at home alone. I watched TV, played computer games then I went on the yard... Nobody on the yard at that moment. I walked and walked around the yard, only the light wind and birds in the sky flied over the trees. I sat under the old tree and dreamt. For a moment I saw something interesting and amazing. You never believe me, I heard a strange voice behind me. Somebody said: " Look around. Look around". I stood up and looked around... Millennial Oak looked straight at me and said again:"Look around! 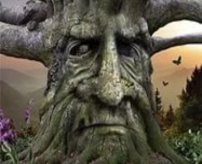 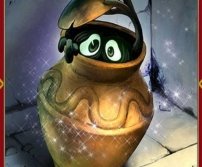 I didn't believe my eyes and ears, I couldn't believe myself. I have seen only a pot on the stone and some flowers near it. I pushed the pot and heard a strange voice again:" Are you here? Take me at home! Take me, please." I did not understand and asked: " Who are you and where are you? The voice answered: "If you take me at home, I'll help you. I'm a pot." "How strange, how a simple pot can help me?" - I thought. However, I took it with me and trudged back home. I put it

under stairs and forgot for a while. Some month passed... Once upon a time at midnight I heard something strange. I woke up, run downstairs and looked under the stairs. I was so surprised, such as I SAW SOMETHING UNFOGETABLE! Two big eyes looked at me from the pot. Then small, thin hand gave me a letter and some seeds.

The next day I did everything as it was written in the letter. A month passed... And I have had a beautiful flower. it was not an ordinary flower. It was a rainbow flower. It could make any wish. All you have to do is tear off a petal, throw it up in the air and say: "Fly, petal, oh –

East to West you go.

Then North to South

Touch the ground, do,

Then you say what you wish is. And it will come true.

Long ago, when the world was ruled by kings with their queens, there was one strange sea. There were real legends about it,  but nobody even couldn’t  imagine that all stories were true. Above the indicated sea rules the sea king, the famous god Poseidon. He had a beautiful daughter, no one could compare with her beauty. The girl's name was the Little Mermaid. She was kind to all the inhabitants of the underwater kingdom. But for some reason no one wanted to take her, except for her best friend, the clown fish of Maurice, believed that the girl was not worthy of living in their kingdom. Yes. The Little Mermaid had one feature. Her body was human, only her legs were tail. The girl lived hard, she had few friends. Day after day, she did that she read books and played puzzles. But one day everything changed. Maurice, as usual, swam for the Little Mermaid, and they both went for a walk. There was a quiet night that did not bode ill. The sea is calm. Having reached the local forest (which consisted of impassable algae, and therefore the inhabitants called it prodigal), the friends saw a terrible picture: the wicked witch Marlene, who had long ago turned black with her hatred and anger towards the world around her, tormented a poor sea-slope called Ben. He was a watchman of the royal treasury. Therefore, Marlene wanted with the help of Ben to obtain the untold wealth that was stored in the treasury. Quietly swam to the sorceress and Ben, trembling with fear, the Mermaid and Maurice overheard their conversation. They immediately realized that Ben refused to help the sorceress, he remained faithful to his king. The Little Mermaid ordered Maurice to stay in place and watch carefully so that nothing happened, and she immediately swam to her father. Poseidon listened attentively to his daughter. At the end of the story, he hugged the Little Mermaid, kissed her and told him to do something about it.To the prodigal forest was sent a detachment of royal warriors. They were marching to Marlene that hour. And the king himself very strictly dealt with her. He drove her out of the kingdom and ordered never to return again. But what happened to the Little Mermaid? Local residents began to love and respect her. They were grateful to her for saving the kingdom. Therefore, with impatience waited for the rise of the princess to the throne. But that is another story. 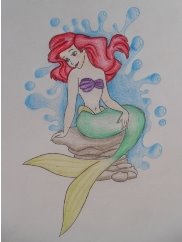 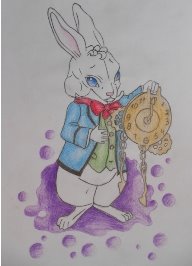 A very-very  long time ago in a terrible forest under big old oak lived little white rabbit. He lived alone in his house and did not have any friends very long time, because he was angry and rude. He was dressed in all black and gray, and even his eyes were colorless. But one day on his head dropped something very heavy and gold - it was an old clock. Rabbit started to clean dirty clock, then opened it, and saw that the quickly spinning clockwise. BAM! and then he found himself in the future.

Rabbit see a lone house in a dirty hole, and in the forest after the fire, which committed Rabbit nobody lived. He wanted to live alone and therefore set fire to the forest, but years passed, and the rabbit felt lonely… Rabbit looked at himself and could not believe that he was waiting for a future. He wanted to change his life, but did not know how to turn back the clock. Rabbit put forth a wish and went to sleep under a tree near him, he put gold watch.

And again - BUM! Rabbit woke up screaming in decrepit oak. Through this of rabbit ran to other animals, but he again began yelling at everyone and say that animals brought his outside at night when he slept. Animals would understand everything and help the poor but he drove them. Rabbit down the hole and saw a gold watch on the bed, and then he remembered his journey into the future. Then he quickly ran into the woods and began to call all the animals in your house, animals first astonished and then agreed to come to dinner. Rabbit was happy, he began to prepare various dishes for the guests, he made his terrible clothes and sewing a blue jacket and red bow, his eyes were blue too…

Since that time, every week all the forest animals  come for tea to a rabbit.  And after many years in his hole gets a little girl – Alice, but that's another story…

Once upon a time lived a little girl. She has got an unusual name. Her parents and friends called her “Happy”. She tried to be happy every minute, when it was strong rain or storm, when birds sang songs or flowers blossom. She loved nature, people and animals. She had got only one wish to visit one of the most beautiful countries in the world. She had got many friends, but nobody knew where such country situated. 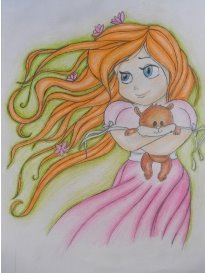 One day her grandma baked her  a sweet bun and put it on the windowsill. The little girl gave it the name “Kolobock”, because it was round . The bun jumped down on the floor  and became look like alittle boy, he took a bike and run away such  as he  wanted to find the land of girl’s  dream. He visited many countries, he traveled by car, by bus, by ship, by train even by helicopter, but he couldn’t to find such country. He met many people and saw different animals, he asked about  unusual country, but nobody could help him. 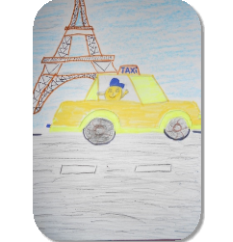 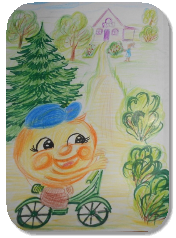 Many months  passed  and he came back home. Only on that moment he understood the best land, the best country its the homeland, its MOTHERLAND! He told a lot of interesting stories about his travelling and his advantages. 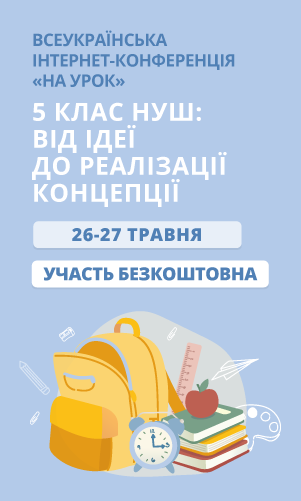