Travelling to the English-Speaking Countries

Travelling to the English-Speaking Countries

Teacher: Dear children! Today we have a press-conference «Travelling to the English-Speaking Countries». 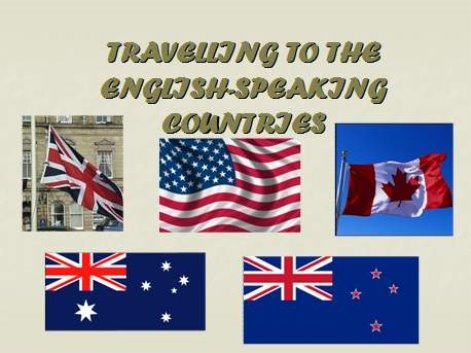 Our main aim is to improve our knowledge, to learn new words and expressions, to listen to some new and interesting information about English-Speaking countries and to do some tests.

Imagine that the delegations from the UK, the USA, Canada, Australia and New Zealand came to our gymnasia.

Will you present us your country.

Pupil 1: The United Kingdom is situated off the northwest coast of Europe between the Atlantic Ocean on the north and northwest and the North Sea on the east. It is separated from the Continent by the English Channel. The United Kingdom includes Great Britain and Northern Ireland, the Isles of Man and Channel Islands. Great Britain, the largest island in Europe, contains England, Scotland and Wales. 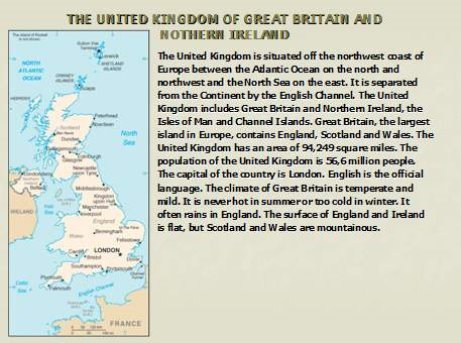 Pupil 2: The United Kingdom has an area of 94,249 square miles. The population of the United Kingdom is 56,6 million people. The capital of the country is London. English is the official language. The climate of Great Britain is temperate and mild. It is never hot in summer or too cold in winter. It often rains in England. The surface of England and Ireland is flat, but Scotland and Wales are mountainous.

Pupil 3: The main rivers are the Thames, the Severn, the Clyde, the Trent and the Mersey. The longest river is the Severn. The largest cities of the country are London, Birmingham, Manchester, Cardiff, Glasgow. The important ports are London, Cardiff, Glasgow. There are many universities, colleges, libraries, museums and theatres in the country. The most famous universities are Cambridge University, Oxford University, Glasgow University. Teacher: You have listened to the delegation of the UK. Now let’s do a test. This test will show how you understood the information.

1. The United Kingdom is situated  off …

3. The UK is separated from the Continent by …

4. The largest island of the UK contains …

5. The climate of Great Britain is …

6. The surface of England and Ireland is …

7. The longest river in Great Britain is …

10. The important … are London, Cardiff, Glasgow.

Teacher: Now the delegation from the USA will tell about its country.

Pupil 4: The United States is located on the continent of North America and is the 4th-largest country in the world. It has an area of 540,939 square miles. It is bordered on the north by Canada, on the east by the Atlantic Ocean, on the south by the Gulf of Mexico and Mexico, and on the west by the Pacific Ocean. The population of the USA is 238,7 million people. Pupil 5: The capital of the country is Washington, D.C. (District Columbia). It was named in honour of the first President whose name was George Washington. People of different nationalities live in the USA. There are many scientific institutions, museums, libraries, theatres and other

places of interest there. The USA is a federal republic.

Congress is the American parliament, which consists of two Chambers, the House of  Representatives and the Senate. The President is the head of State and Government. 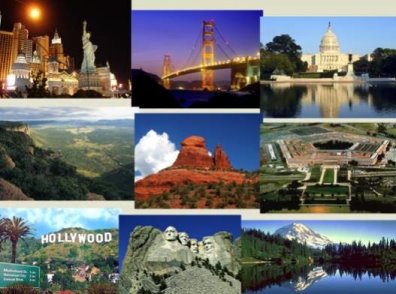 1. The USA is located on the continent of …

3. The USA is bordered on the north by …

5. Washington was named I honour of the … whose name was George Washington

6. The official language of the United States is …

a. a federal republic    b. a parliamentary monarchy    c. self-governing state

Teacher: Now let’s listen to the information about Canada.

Pupil 6:  Canada covers all of the North American continent north of the US except Alaska and the small French Islands. Its total area of 3,851,809 square miles, makes it the second largest country in the world. Canada is bordered by three oceans, the Atlantic, the Arctic and the Pacific. The population of Canada is 25,7 million people. The capital of the country is Ottawa. Canada is a nation composed  of two linguistic and cultural groups: French and English. That’s why the two official languages of Canada are English and French. In the north of the country there are 330,000 Indians and 25,000 Eskimos who are the original  peoples of the North, Central and South America. 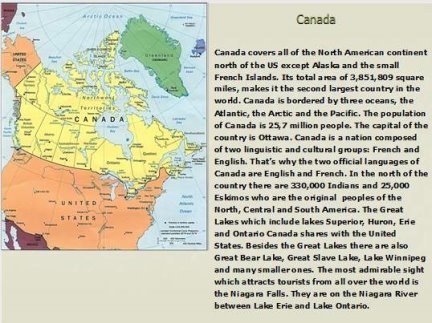 Pupil 7: The Great Lakes which include lakes Superior, Huron, Erie  and Ontario Canada shares with the United States. Besides the Great Lakes there are also Great Bear Lake, Great Slave Lake, Lake Winnipeg and many smaller ones. The most admirable sight which attracts tourists from all over the world is the Niagara Falls. They are on the Niagara River between Lake Erie and Lake Ontario. All parts of the country have cold weather in winter. 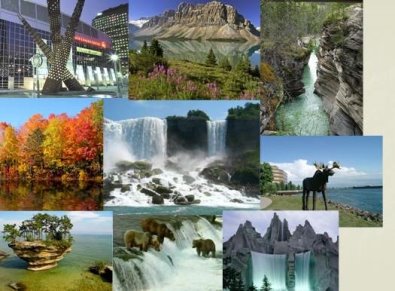 Pupil 8: Canada is a self-governing federal state. Formally the head of state is the King or Queen of England. Canada includes ten provinces: Newfoundland, Prince Edward Island, Nova Scotia, New Brunswick, Ontario, Quebec, Manitoba, Saskatchewan, Alberta, British Columbia and two territories:  Yukon and the Northern Territories. Canada has a Parliament. The Canadian Parliament is made up of the House of Commons and the Senate. Ottawa, Toronto, Montreal, Winnipeg, Edmonton, Vancouver, Quebec and Hamilton are Canada’s most important cities. The country has also the largest ports in  the world. Canada’s large ports are Quebec, Montreal, Toronto and Vancouver. 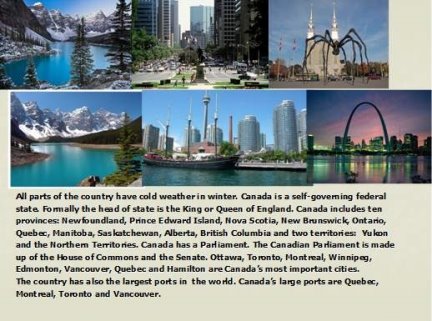 1. Canada covers all of the … American continent.

2. Canada is located  on … of the US except Alaska.

c.  the Pacific Ocean and the Atlantic Ocean

5. The official languages of Canada are …

6. … are the original people of the North, Central and South America.

a. English and French    b. Indians and Eskimos    c. Canadians

8. Formally the head of the stare is … of England.

9. The Canadian Parliament is made up of …

10. The most admirable sight which attracts tourists from all over the world is ….

Pupil 9: Australia is a self-governing federal state. It is situated in the southwest of the Pacific Ocean, occupying the continent of Australia and a number of islands, of which Tasmania is the most important. Australia is a continent-island washed on its western shoreline by the Indian Ocean and on its east coast by the Pacific Ocean. Australia has an area of 2,965,00square miles, includes six states and two territories. 16 million people now live in Australia. The federal capital of the country is Canberra. The official language is English. Australia’s climate is warm and dry. As Australia is situated in the south hemisphere, it has winter when we have summer in the northern hemisphere, and summer when we have winter. Summer is from December to February; autumn (fall) Mach to May; winter – June to August; and spring – September to November. 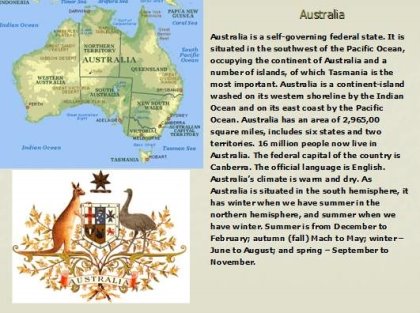 Pupil 10: There are many unusual animals in Australia. The best known are the kangaroo, duckbilled platypus,  the wallaby, the koala bear, the dingo or wild dog and the possum. The emu is the large Australian bird which cannot fly but runs well. The emu and the kangaroo are represented on the national emblem of Australia. Australia is the flattest of the continents. 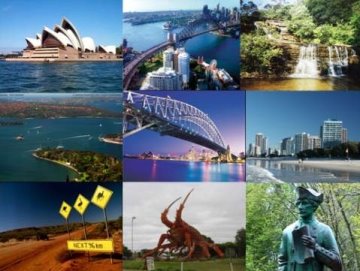 1. Australia is situated  in the southwest of the …

3. The federal capital of the country is …

4. The official language of the country is ….

6. Australia is situated in  the … hemisphere.

9. … are represented on the national emblem of Australia.

a. The emu and the kangaroo    b. The koala bear and the emu    c. The possum and the dingo

10. Australia has winter when we have …

a. can fly and runs well    b. cannot fly but runs well   c. cannot run well but flies well

Teacher: And now the last travelling to the English-Speaking country. It is New Zealand.

Pupil 11: New Zealand is an independent state. It is situated southeast of Australia. It consists of North Island, South Island, Stewart Island, the Chatham Island, and several island groups. New Zealand has a total area of 103,736 square miles. Over 3,3 million people now live in the country. The capital of the country is Wellington. English is the universal language, although Maori is still spoken among the Maori population and is taught in the Maori schools. New Zealand has a temperate wet ocean climate. The chief rivers are the Waikato, the  Wairu, the Rangitata, the Clutha, etc. 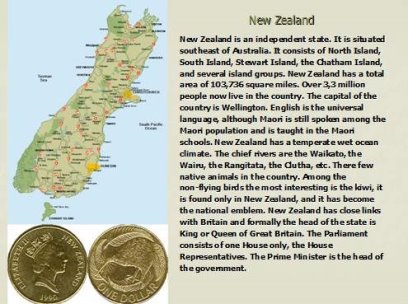 Pupil 12: There few native animals in the country. Among the non-flying birds the most interesting is the kiwi, it is found only in New Zealand, and it has become the national emblem. New Zealand has close links with Britain and formally the head of the state is King or Queen of Great Britain. The Parliament consists of one House only, the House of Representatives. The  Prime Minister is the head of the government. 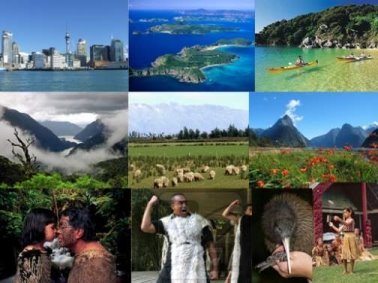 a. an independent state   b. a parliamentary monarchy    c. a federal republic

7. There are … native animals in the country.

8. Among the non-flying birds the most interesting is …

9. Formally the head of the state is … of England.

10. The Parliament consists of … only.

12. English is the … language in New Zealand