Plan of the lesson

Greetings. Teacher explains the theme and the aims of the lesson.

T. Good morning! Glad to see you. How are you? I’m glad you are in good mood. Please don’t feel anxious at the lesson today. Today we have an unusual lesson. The theme of our lesson is “Australia”. The aims are to get more information about this country and its beautiful cities and develop listening, reading, speaking and writing skills. At the end of the lesson you:

T. You have the word “Association”. Your task is to name the words you associate with the topic. Every next word should begin with the next each letter.

T. Before we start talking about Australia let us revise some words and word combinations and geographical names.

T. I prepared a text for you to listen to. After listening to it you are to answer the questions and say whether the statements are true or false.

Located between the Indian and the Pacific oceans, Australia is a country that covers most of the Australia-Oceania continent. It borders on the Arafura Sea and Timor Sea on the north, and the Tasman Sea on the south-east.

Australia also has some mountainous areas and plateaus scattered throughout the country. The Blue Mountains, on the south-eastern end of Australia, get their name from the blue haze caused by oil droplets given off from the eucalyptus trees. As an island, Australia also has many

The highest point on the Australian mainland is Mount Kosciuszko, New South Wales, at 2228 metres above sea level. The lowest point is the dry bed of Lake Eyre, South Australia, which is 15 metres below sea level.

Mount Augustus, located in Western Australia, is the world's biggest monolith. But Uluru, also called Ayers Rock, is the most popular monolith and is an icon for Australia.

The country also hosts a great variety of marsupial animals such as the koala and the kangaroo.

Australia consists of six states, which are the New South Wales (NSW), Queensland (QLD), South Australia (SA), Tasmania (TAS), Victoria (VIC) and Western Australia (WA). There are also two major mainland territories, the Northern Territory (NT) and the Australian Capital Territory (ACT). Most of the population resides along the south-east coast, mainly in the cities of Sydney and Melbourne.

T. Last time I asked you to prepare some interesting information about the biggest cities of Australia. Who wants to speak?

Canberra – is the capital city of Australia. With a population of over 312,000, it is Australia's largest inland city and the eighth largest Australian city overall. The city is located at the northern end of the Australian Capital Territory (ACT).

The highest point is Mount Majura at 888 metres (2,913 ft). Other large hills include Mt Taylor, Mt Ainslie, Mt Mugga Mugga and Black Mountain. The surrounding bush land and the original bush land that Canberra was built in is a mixture of eucalyptus savanna, open grassland, scrubland, swamp and dry eucalyptus forests.

Canberra has a marine west coastal climate  with four distinct seasons. Canberra experiences hot, quite dry summers, and cold winters with heavy fog and frequent frosts, with a rare spot of snow in the CBD but the surrounding areas get annual snowfall through winter and often the snow capped mountains can be seen from the CBD. 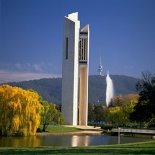 Melbourne – is the capital of state Victoria   (population in state - 4645000), the second largest city in Australia.

You’ll enjoy traveling around Melbourne on the City Circle Tram. It runs every 10 minutes from 10. a.m. till 6 p.m. While you are sitting on the tram, the conductor will  point out the most interesting sights in Melbourne.

Melbourne - is a very multicultural city. Over a quarter of the population was born overseas. It is home to many cultural groups, speaking 170 languages. It is one of the largest Greek and Italian populations in the world. Population of about 1,100,000.

Sydney is the capital of New South Wales (population in state – 6372000). Australia’s oldest, largest and industrial city. Nearly a quarter of all Australians live here. Population of about 4,340,000 and growing. 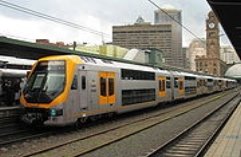 The City of Sydney has a soothing and pleasant climate with warm summers and cool winters. The city does not generally experience extremes of temperature differences but it can only occur under the influence of El Nino current and sudden hailstorms. Bushfires are a major problem in the outskirts of the city, especially during the summer season. The city is also considerably affected by the oceanic influences.

The City of Sydney is bordered by the Pacific Ocean in the east, by Blue Mountains in the west, Hawkesbury River in the north and Woronora plateau in the south. The City of Sydney is known for its wonderful beaches and coastal areas. There are more than seventy harbor areas in the Sydney urban area and Sydney Harbor is the largest natural harbor in the world. 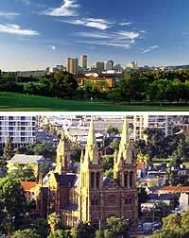 Adelaide- the capital of South Australia (population in state 1467000), was planned in 1836, by surveyor Colonel William Light. The city centre has a grid of wide streets and various squares all within 1 square mile. This centre is surrounded by a green belt of 930 hectares of parkland.. The main street, King William Street, runs from north to south through Victoria Square at the heart of the city. The climate is Mediterranean - with hot, dry summers and cool, mild winters. The average winter temperature is around 15C; average for summer is 29C. The Torrens River runs through the centre, separating Adelaide and North Adelaide. The city is surrounded by diverse landscapes, including the Mount Lofty Ranges (Adelaide Hills) and coastal beaches. Population of about 1,100,000.

Brisbane -  is the state capital of Queensland (population in state- 3655000) and its most populous city. It is also the third most populous city in Australia, behind southern rivals Sydney and Melbourne. The city is situated on the Brisbane River on a low-lying floodplain between Moreton Bay and the Great Dividing Range in Queensland. The city of Brisbane is hilly. Brisbane has a humid subtropical climate with hot, humid summers and dry, mild winters. Tropical climate makes it a year-round vacation place. Population of about 1,400,000.

Darwin, named after the famous naturalist, Charles Darwin, is Australia's most northernmost state capital-( North Territory-population 211000). Its tropical climate and proximity to Australia's northern neighbours has attracted many Asian immigrants, which in turn has helped turn this once rough-and-ready frontier town into a multi-cultural city beside the sea. Population of about 70,000. Darwin is dominated by two distinct seasons. The wet season, known locally as ‘The Wet', runs roughly from early November to the end of March, and the dry season, or ‘The Dry', which generally lasts from April to October. Darwin is the ‘gateway' to the world-famous Kakadu National Park, the gorgeous Litchfield National Park, dramatic Katherine Gorge, and the red crags of the Kimberley region.

Hobart is the state capital and most populous city of the Australian island state of Tasmania (population of state of Tasmania is 457000). Founded in 1803 as a penal colony, Hobart is Australia's second oldest capital city after Sydney. The city is the financial and administrative heart of Tasmania, and also serves as the home port for both Australian and French Antarctic operations.Population of about 200,000. Hobart has a mild temperate oceanic climate with four distinct seasons. The city rarely receives snow during winter, the adjacent Mount Wellington is often seen with a covering. Unseasonal mountain snow covering has been known to occur during all seasons. Though snow is unusual in general at sea level in Australia, Hobart has most probably had the most sea level snowfalls out of any State Capital, though Sydney, Melbourne and Adelaide have also recorded snow.

Perth - is the capital of state of Western Australia (population in state is 1851000).    Population of about 200,000. Perth ranks fourth amongst the nation's cities, with a growth rate consistently above the national average. Perth is one of the most isolated metropolitan areas on Earth. The nearest city to Perth with a population over 1 million is Adelaide in South Australia, which is 2,104 kilometers (1,307 mi) away.

Perth is set on the Swan River. The city centre and most of the suburbs are located on the sandy and relatively flat Swan Coastal Plain, which lies between the Darling Scarp and the Indian Ocean. The soils of this area are quite infertile. Summers are generally hot and dry, lasting from late December to late March, with February generally being the hottest month of the year, making Perth a classic example of a Mediterranean climate. Winters are relatively cool and wet, with most of Perth's annual rainfall falling between May and September.

Much of Australia has a continental climate. The temperatures get hot during the day, then drop considerably at night. Australia is a huge country (but small continent).  It doesn't have one temperature like

Singapore.  The weather tends to vary more from north to south than it does west to east

TROPICS:  The northern part of the country (northern Western Australia, the Northern Territory, and extreme northern Queensland) are all relatively close to Indonesia and share its tropical weather.  There are really only two seasons here, the Wet (November to April) and the Dry (May to October).  The Wet season has temperatures between 30-50° C (86-122° F).  In the Dry, temperatures are a more reasonable 20° C (68° F).   There is a build up period between the Wet and the Dry, as the season transitions from one to the other.  Humidity is high.  Winter temperatures are actually pleasant.  It doesn't get colder than 14° C (57° F).  The ideal time to visit the tropical regions, like Darwin, Kakadu, Karijini National Park, etc is September-October.

OUTBACK:   The Outback, the sparsely populated area in the central part of the country is best thought of as a desert, with very hot days and very cool nights.  Considering that the winters in Australia aren't anything close to a day in Antarctica, the best time to be in the Outback -- places like Cooper Pedy, Alice Springs, or areas more remote -- is winter, when temperatures are about 20° C (68° F), like a cool summer's day in other parts of the world. A real summer's day in one of these places can average the same as your body temperature -- 37° C (98.6° F)  Thermal underwear and a heavily insulated sleeping bar are mandatory if you are camping in the Outback during the Australian winter.

TEMPERATE REGIONS:   This applies to most of the rest of

the areas of the country where the majority of tourists are likely to devote their time.  We're talking about Melbourne, Adelaide, Sydney, and Perth, and the areas in between.  Summer temperatures average 30° C (86° F) and winter temperatures 15° C (59° F).   These are temperatures any normal person could easily live with.  Tasmania in the summer can get quite cold, with nighttime temperatures below 10° C (50° F) and sometimes below freezing the national parks.   Before I'd bothered to purchase a wider range temperature sleeping bag, I emerged a few evenings with icicles sprouting of my nostrils.  Tasmania may be better thought of as having a climate more similar to New Zealand than the rest of mainland Australia.

Very nice. Now I have another assignment for you. Now on the board you’ll see some sentences with mistakes in it. You have to find and correct them.

During the lesson we’ve talk about Australia. Now we will sum up all our knowledge in the form of “Fact File”. So open your copybooks take your pens and write down.

T. Let’s sum up the results of our lesson. Did you like it? Have you found new information?

T. Оur lesson comes to the end and your home assignment will be to talk about Australia using the Fact File.