Hi. I’m Dino, the family dog. I help keep people safe, especially on the roads. Take a look at my diary to see what I did last week. Sunday
Some children really don’t think. Our neighbour’s boy ran in front of a car to get his ball. The car almost hit him. I saved him though. Remember, always look and listen.
Monday
Walking on the street at night can be very dangerous, especially if you wear dark clothes. Car drivers can’t see you very well, just like these two I had to take home. Luckily I never go out without my reflective jacket and collar. Remember, BE SEEN!
Tuesday
People can get very angry when driving, usually for silly reasons. One driver started shouting at Mum today when she stopped to let some children cross the road. I soon made him stop. Wednesday
One thing makes me really mad. Grrrrrr. People walking on a dangerous road when they can walk on the safe pavement. I saw two girls doing that today but I soon made them change their minds.
Thursday
Seat belts can save your life! I make sure everyone in our car wears their seat belt. If they forget, I soon remind them. Even I’ve got one.
Friday
I like Fridays. The roads are quieter. But you still have to be careful. I caught Dad talking on his mobile phone while driving. I soon stopped him though. Don’t worry, he got his phone back. Saturday
Today Mum took me for a walk. One car was parked in a very dangerous place. It was right on the corner of the street. Don’t worry though. I left him a message! 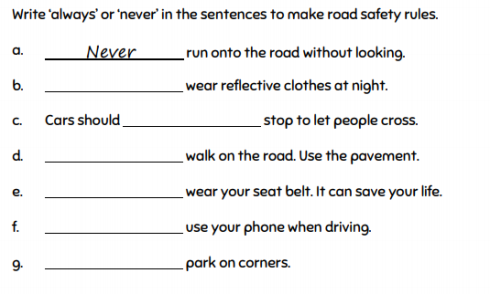 Story 18
Boudica
Have you heard of Boudica? She was queen of the Iceni, a tribe of people who lived in eastern England, in Britain, almost 2,000 years ago.
Boudica was tall, with very long red hair, and wore a gold necklace and a beautiful brooch. She was very intelligent, and had probably been to ‘warrior school’ so she knew how to fight.
By AD 43, the Romans had conquered southern England. At first, they allowed Boudica and her husband to continue to rule. But when Boudica’s husband died, the Romans took all his land and property. They decided to rule the Iceni and they treated them very badly. So, in AD 60 or 61, Boudica and the Iceni rebelled against the Romans, together with other tribes who were also treated badly by the Romans.
Boudica and her large army defeated one Roman army and destroyed the capital of Roman Britain, Colchester. In Colchester she destroyed the temple built for Emperor Claudius. They also destroyed two more cities. Many people died. ‘Now I am fighting for my freedom. We must win this battle or die. Let the men live as slaves if they want. I will not!’
Finally, Boudica and her army were defeated. The surviving Iceni people ran away, or were turned into slaves. Boudica probably killed herself with poison – her body has never been found.
The rebellion was so shocking to Emperor Nero, the ruler of the Roman Empire, that he wanted to withdraw from Britain!
In the end, the Romans occupied Britain for over 350 years more. But they also treated the British people more fairly and introduced lower taxes. Boudica has been an inspiration to other female leaders such as Elizabeth I and Queen Victoria. Her rebellion was one of the most significant against the Roman Empire. Now, Boudica is remembered as one of Britain’s greatest heroines. 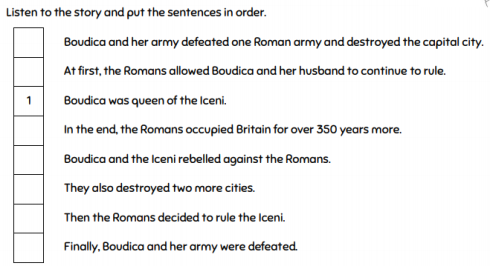 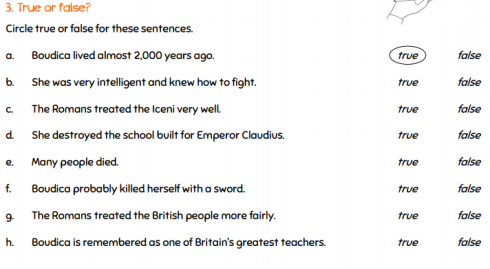 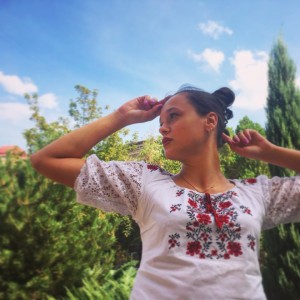