T: Good morning, children! I am glad to see you! How are you? At the previous lessons we have spoken about famous artists, the world museums. Today our lesson will be devoted to the street art. Your task was to prepare some interesting information about this kind of art.

T: What kinds of street art do you know?

T: Now let’s make a tour around the cities and their streets. Look at the screen and try to

name the kind of the street art.  What is a busker?  What is busking? What do you know

about this kind of art?

T: What “ street art” do you see or hear in your town? Is this art? Is this a kind of

entertainment  or the way to earn money?

T: We are going to play a game to see how attentive you were and how you remembered the new words. ( Pupils choose the card with the definition of the word and name this word).

A large picture in a street that advertises something  ( billboard)

Writing or drawings on walls ( graffiti)

Someone who keeps still like a statue  ( living statue)

To entertain people for tips ( to busk)

A person who busks ( a busker)

The practice of performing in public places for tips ( busking)

T: To be able to understand the text you should  read the new words and try to remember the main facts from this text. ( one pupil reads the words with their translation)

Text “ Graffiti as a part of modern art”

( pupils read the text in chain).

Graffiti as a part of modern art

Graffiti is the name for images or lettering scratched, scrawled, painted or marked in any manner on   property.

Graffiti has existed since ancient times. In 1969, one person made graffiti famous and inspired people to start ‘tagging’ (writing their nick-name in an artistic way). That person was a Greek teenager named Demetrius who lived in 183rd Street in New York. His nickname was Taki so his tag became TAKI 183. He then wrote it everywhere and people copied him. When buses and the subway stopped in the main station in New York, dozens of writers would write their name on it.

Graffiti became a way of life. Graffiti style was massively influenced by the hip-hop culture that had started in the Bronx in the sixties. Hip-hop with its rapping, break dancing attitude and graffiti became a way to show anger and humour. Street gangs began to write the name of their gang on walls in order to mark territorial boundaries.

Soon graffiti was spreading across America. The railroad and subway trains were so popular for graffiti so that it could be seen by many people. Train companies invested in special cleaning chemicals so that graffiti could be removed quickly. However one graffiti artist was not deterred – Lee Quinones decided if he couldn’t paint trains, he’d paint his graffiti on handball courts instead. No graffiti artists had ever been offered money for their work but one day Fred Brathwaite, a graffiti artist himself, offered Quinones money for his murals. Then they formed a graffiti mural group.

Many graffiti artists from the 1980s became rich. They were criticized for this by others who said that their motivation for graffiti shouldn’t be money. There are hundreds of international graffiti events for artists now. These events promote unity between graffiti artists who are often rivals.

Many states in the USA and different countries would like to stop graffiti. In Pittsburgh, USA, there is a proposed law to ban the sale of marker pens to people under 18. Other countries are very harsh. Singapore has just one wall where graffiti can be written ( even then, some of it is censored). The city has a campaign for graffiti rules. In 1994, an American teenager Michael Fay sprayed paint on a car and was sentenced to a flogging.

Since those days, graffiti has changed a lot. Nowadays, it has the status of “street art” and you get graffiti in places where you wouldn’t expect it – in advertisements, on clothes, on toys and even on the website.

T: Is graffiti widespread in Ukraine? Where can you see graffiti? Discuss your attitude towards graffiti. The first group proves: Graffiti is art. The second group – Graffiti is vandalism.

T: As the English proverb says: ‘So many men so many minds’.

T: I think it was interesting for you to learn some information about street art. As for me I was impressed  of living statues and street paintings. And what about you?  What was interesting and new for you?

T: Your home task will be to prepare some interesting material about body art.

What is a Busker?

Busking and street performing is the art of street theatre. It is a style of performance unlike any other. A musician playing in the open air, tap dancers hoofing on a side walk. These are the images that first come to mind when you hear the term 'busker'. But the beauty of street theatre is that it can take on many guises. There are buskers who create temporary art on the pavement knowing it will be washed away or trampled after they are finished.

The word busker is slang from the root busk, "to seek to entertain by singing and dancing" probably from Spanish buscar, "to seek." Thusly, a busker seeks an appreciation of their artistic performance.

Busking and street performing is an art form that is created and predicated upon its direct relationship with its audience. Unlike any other performance style, its primary source is the spontaneity and improvisation of the moment. These artists embrace a wide range of disciplines from the ubiquitous jugglers, dangerous magicians, happy comedians, hungry fire-eaters and higher acrobats to some of the most intriguing performance artists on earth. Highwire walkers, giant sculptural puppets, stilt troupes, visual installation artists, alternative musicians, trapeze aerialists, dramatic character artists, passionate dancers and interstellar mimes are just a few of the spectacles the public can witness.

Busking is a way of bringing the entertainment to the people. There is no form of theatre or art more diverse, more spontaneous or more accessible. Some performers start as buskers and move on to fame. Well known buskers include Penn & Teller, The Flying Karamotsov's, Patch Adams, Philip Petite, W. C. Fields, Marcel Marceau, Sinbad, and Jimmy Buffet. Some busk for the philosophical freedom it symbolizes. Most performers agree that there is nothing harder than busking but also that there is seldom anything more rewarding. Busking is a style of performance that is difficult to describe before it has been experienced. A play takes its shape in writing and rehearsals and then is shown to an audience complete, but street performing is a social event in which the spectators are often as active as the performers.

Good street performing draws its substance from the audience itself, reacting and improvising around the peculiarities of the group. No two performances are ever identical. Spontaneity and improvisation take precedence over perfection. Busking displays an eclectic array of talent outdoors using the sidewalks, the parks, plazas and the street as their stage.

Celebrate the art of street theatre through unadulterated comic, physical and outrageous performances, spanning from the superbly sublime to the totally ridiculous. Although there is no admission fee or tickets to sell out, with good street theatre, it is very definitely standing room only! Children are absolutely fascinated with buskers and the only cost is an appreciative contribution to the performers hat at the end of the show.

Street painting, also commonly known as street art, is the activity of rendering artistic designs on pavement such as streets, sidewalks, and town squares with impermanent materials

A large picture in a street that advertises something

Writing or drawings on walls

An artist who draws pictures on the pavement in chalk

To entertain people for tips

A person who busks

The practice of performing in public places for tips

A concert taking place outside a hall in the open air

They mime, dance and tell jokes

They sing or play the musical instrument entertaining people 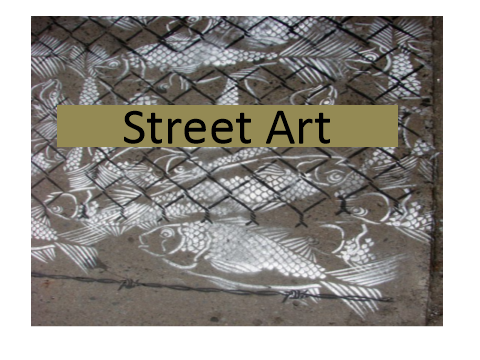 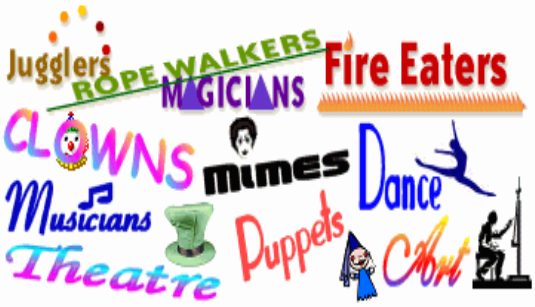 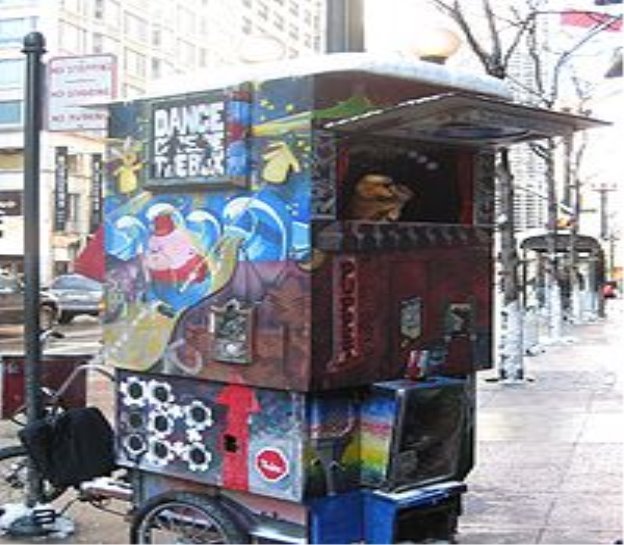 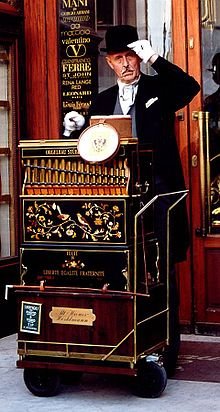 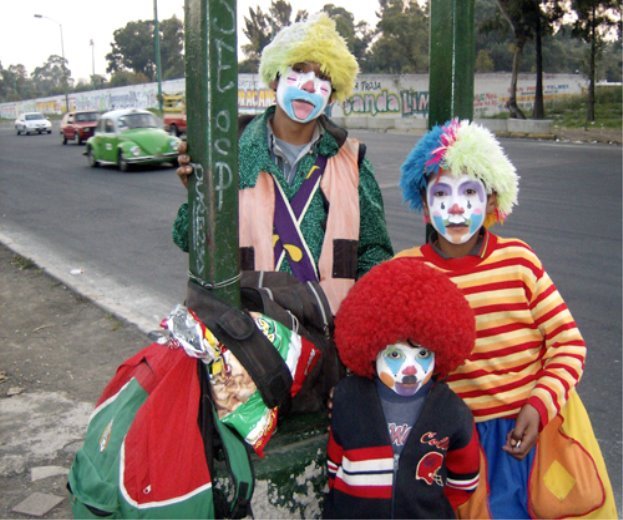 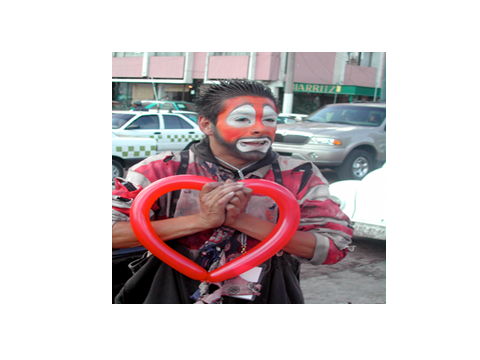 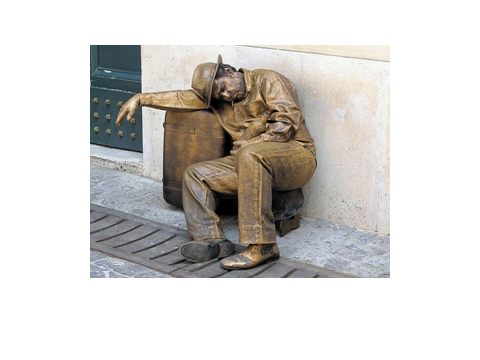 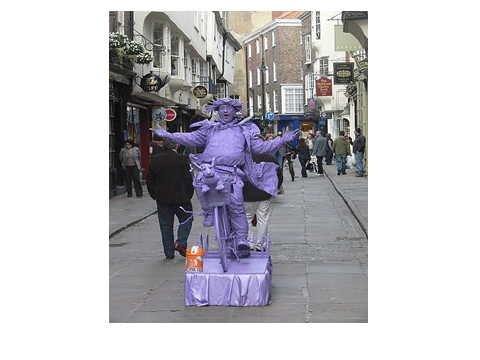 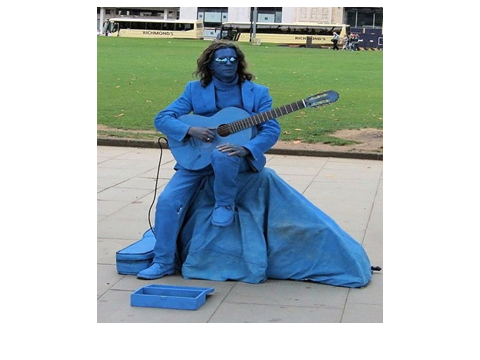 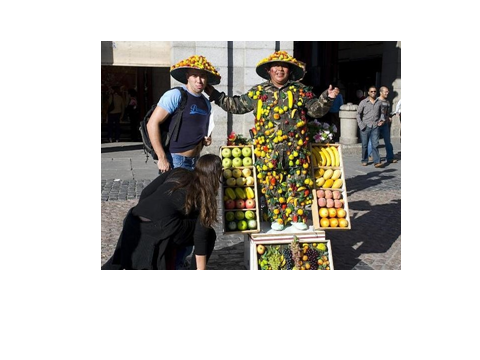 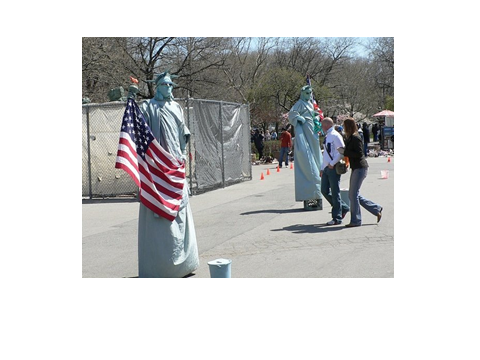 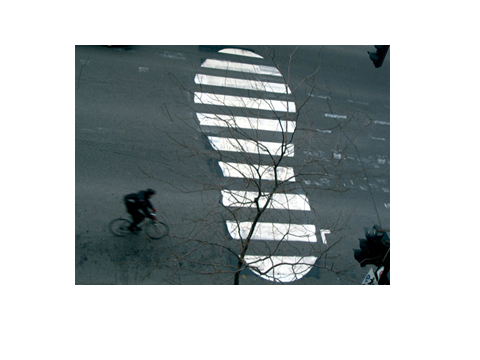 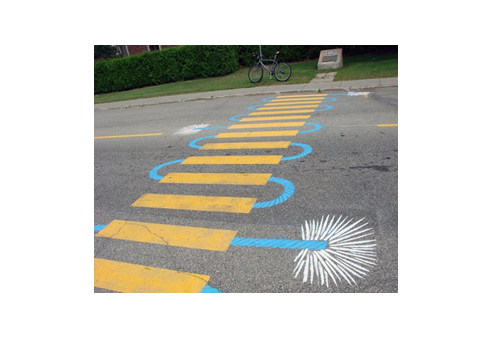 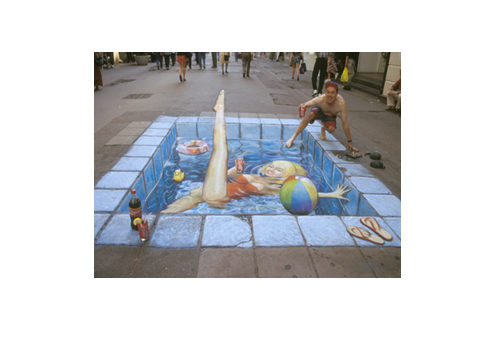 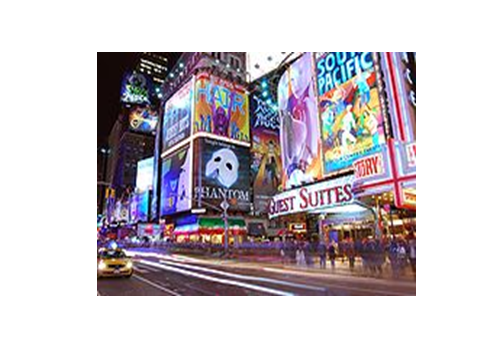 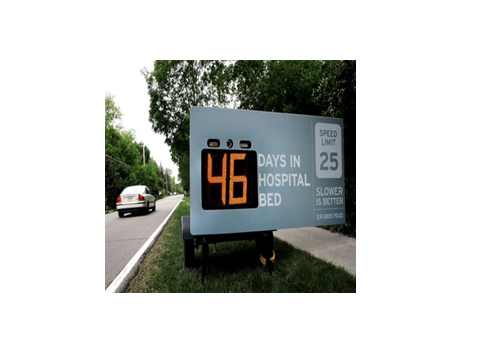 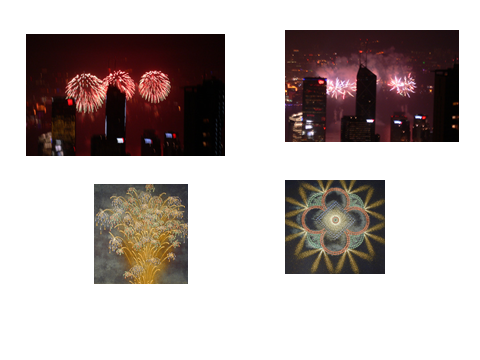 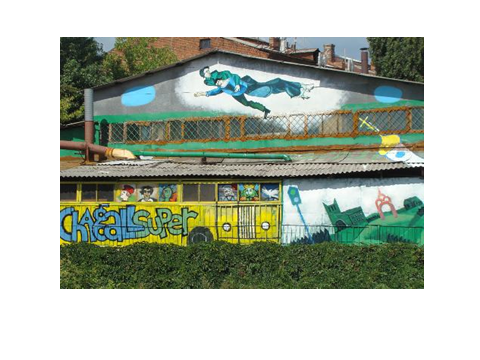 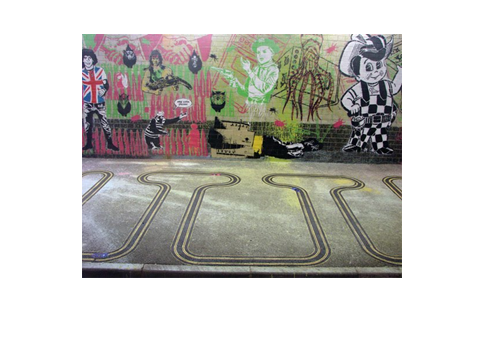 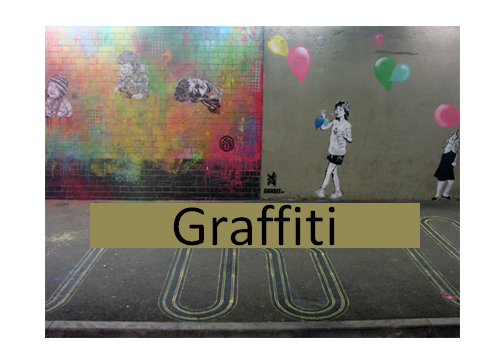 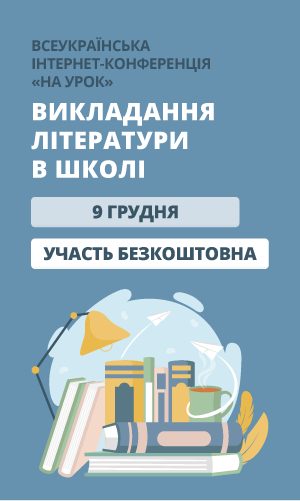