«London Virtual Tour. The Places of Interest in London»

T.: The theme of our lesson is “Virtual tour about London”.  Today we’ll speak about sightseeing in London. We’ll learn some new facts about London, places of its interest  by reading, speaking, listening, watching the presentation of your classmates, where some of you will be guides; we’ll do quiz and tests.

The pupils check what they have already learnt about London

Keys to the London Quiz

3. Listen to the texts about The Tower of London and be ready to understand and answer the questions.

The Tower of London

There is no denying that the Tower has from its beginning served both as a prison and a place of execution. Many prisoners lived out their lives in cold, damp cells. Many laid their heads on the executioner's chopping block (плаха). Among the victims were noblemen, politicians and two of Henry VIII 's wives—Anne Boleyn and Catherine Howard, Before the Tower became an infamous prison, it was at the centre of British history. William I, the victorious Norman conqueror of England in 1066, had a wooden fortress built on the site to discourage  Londoners from staging  an uprising against him. It was William the Conqueror, as he became known, who first recognized that a fortress at this point on the River Thames would quickly sight any hostile force approaching up the river from the Channel. By the time the first English monarch used the Tower as a royal residence, it had become a mediaeval palace and England's strongest fortress.

It was during Henry VIII' s reign that the Tower became the destination of the king's political enemies. Two of the features of the fortress, Traitor's Gate where all prisoners entered, and Tower Green where many knelt before the executioner, became words known to most Londoners. Queen Elizabeth I, when she was arrested by her  sister and brought to the Tower as a prisoner, passed through Traitor's Gate. So sure was she that she would soon move on to Tower Green that she was supposed to have said, 'I have taken my first step through Traitor's Gate to heaven.' Happily, Elizabeth emerged from the tower unharmed. A number of her opponents when she was Queen were less lucky: they lost their heads on her command.

Elizabeth's successors greatly expanded the Tower. They built a Royal Mint, an Armoury and a museum. Although prisoners were held in the fortress as recently as World War II, public beheadings on nearby Tower Hill stopped in 1747. But the museum, with its splendid collection of amour and its fabulous display of the crown jewels, continues to exert a fascination for visitors. For almost forty years, it has headed the list of London's Most Popular Tourist Attractions.

b) noblemen, politicians, and two of Henry VIII' s wives.

2. It was William I who first recognized that...

a) the fortress would sight any hostile force approaching up the river.

b) the fortress would be the destination of the king's political enemies.

a) all prisoners entered.

b) many knelt before the executioner.

4. Queen Elizabeth I was arrested by her... and brought to the Tower as a prisoner.

a) more lucky than the Queen.

b) less lucky than the Queen.

6. Although prisoners were held in the fortress,...

T.: Give me some reasons why people enjoy travelling.

P.:–gives us knowledge about culture, traditions and customs of the country;

–we can enjoy the beauty of nature and the countryside;

–a good chance to change our lifestyle;

–gives us adventure and excitement.

5. Watch and listen to your classmates’ presentation «Places of Interest in London» 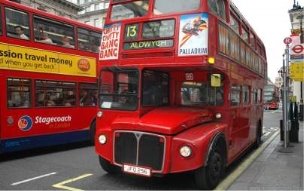 Good morning, Ladies and Gentlemen! Welcome to our Virtual Tour around London! There are many sights and memorial places a visitor would like to see here, in the capital. 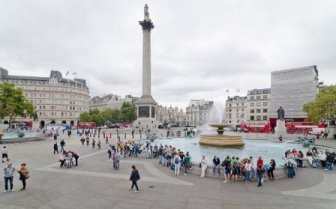 1. Trafalgar Square is one of the most beautiful places in London and one of the tourists' centres of the city. In the middle of the square there is Nelson's Column, erected in the 1840s to celebrate the victory of Admiral Nelson at the Battle of Trafalgar in 1805. Napoleon had threatened to invade Britain. Admiral Nelson swept the seas searching for the French navy and at last met it in Trafalgar Bay. Nelson was killed in the battle but the victory was won. 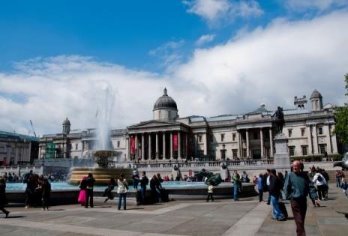 Round the base of the monument there are four bronze bas-reliefs, representing scenes of Nelson's life and death. The metal for these bas-reliefs was cast from cannon captured from the French. The column is 185 feet high and a statue of Admiral Nelson on top is almost 16 feet high. It is guarded at the base by four bronze lions.

The north side of the square is formed by the long, low National Gallery, one of the most beautiful buildings in London, housing the national collection of art and containing some of the world's greatest paintings. In its iconic art

gallery you can find works by masters such as Van Gogh, da Vinci, Botticelli, Constable, Renoir, Titian and Stubbs.

The square is always full of doves, people come to feed them in the square and nobody is allowed to offend the birds. 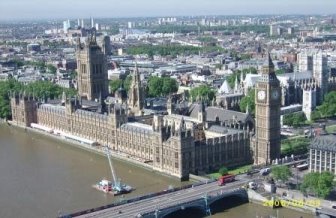 The Palace of Westminster has two miles of corridors and more than 1,000 rooms. When Parliament is sitting, a flag flies from the Victoria Tower (the tallest tower of the complex) and a light shines by night. Visitors can watch the House of Commons and the House of Lords at work from the Strangers' Gallery.

The Houses of Parliament contain the universal symbol of London, Big Ben. This is the name of the 13.5-ton bell on which the hours are struck. The great bell got its name in the 19th century after Sir Benjamin Hall, First Commissioner of Works. The bell and the clock are on the clock tower of the complex.

3. Close to the Houses of Parliament stands Westminster Abbey. The first church on this site was an abbey dedicated to St. Peter. "West Minster" means "western monastery", showing its geographical relation to the City of London. 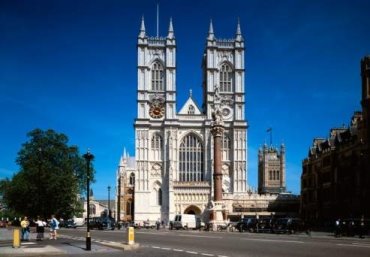 In Westminster Abbey most British monarchs since William the Conqueror have been crowned. Many British kings and queens are buried in the Abbey. Monuments to great figures in many fields of Endeavour are scattered throughout the place: statesmen together with scientists such as Isaac Newton and Charles Darwin. Men of letters have their own section called the Poets' Corner, where Geoffrey Chaucer, Alfred Tennyson, Charles Dickens and some other English poets and writers are buried; many more outstanding poets and writers, though not buried in Westminster Abbey, are honoured by memorials in the Poets' Corner.

Kings, queens, statesmen and soldiers; poets, priests, heroes and villains - the Abbey is a must-see living pageant of British history. Every year Westminster Abbey welcomes over one million visitors who want to explore this wonderful 700-year-old building. Thousands more join  for worship at  daily services 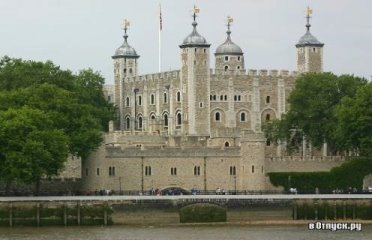 4. The Tower of London, which celebrated its 900th birthday in 1978, takes that date from the year that William the Conqueror began to build on the site. The Tower was first built for the purpose of protecting and controlling the city. In the past it has been a fortress, a palace, and a state prison. Now it is a museum visited by about two million people a year. It is still a military fortress, and here you'll see the troops of crack regiments as well as the Yeomen Warders.

The oldest part of the fortress is the White Tower. The Bloody Tower is the most infamous, for here many important prisoners in bygone days were confined and tortured. Many dukes, kings and queens, other aristocratic pretenders to the throne lost their heads on the block that stands in the Tower's courtyard. Among the famous people who were beheaded in the Tower was the philosopher, creator of Utopia, Thomas More. 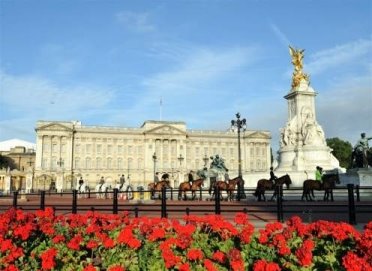 You may see the Tower's tame ravens hopping about on Tower Green, the former site of the scaffold. There have always been ravens here, and a legend says the Tower will crumble if they should ever leave. Since their wings are clipped, that's unlikely.

5. Buckingham Palace (known colloquially as Buck House) is the British monarch's main residence in London. It was built as a country house for the Duke of Buckingham in 1703, and was bought by King George III in 1762.

Today the Palace contains 600 rooms. The interior and the gardens are never open to the public except for those who are invited to Garden Parties or other formal ceremonies. The Royal Standard flying above the east front of the Palace indicates that the monarch is in residence.

A favorable time to see Buckingham Palace is ten-thirty a. m., when you can see the Changing of the Royal Guard. The ceremony takes place every morning and is a real theatrical performance. To the sound of a brass band and words of command, guardsmen form and reform as they change position. At the conclusion of this ceremony each stands still in the pose of a sentry and everything becomes quiet. Londoners love traditions and it is considered that London has preserved them to a greater extent than any other city in England. 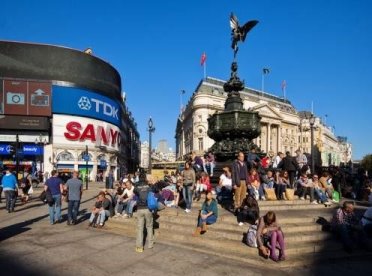 Piccadilly Circus is famous for its lights, neon advertising boards and for the statue of Eros, after the Greek god of love and beauty; it is always crowded, especially on the evenings of big football matches or other events. Now Piccadilly Circus is the punks' favourite gathering ground.

Piccadilly Circus is now partly pedestrianized and a favourite place for people to congregate before going to the nearby shopping and entertainment areas. Soho, Chinatown, Leicester Square and Trafalgar Square are all within walking distance.

Students work in small groups and make up conversations where one of the students is a guide and the rest are tourists. The questions can be of different kind.

-What is the best time to visit London, to your mind?

-What are the most popular tourist attractions in the capital?

-Are Londoners really so reserved and unfriendly as they are thought to be?

-Is the admittance to the National Gallery free?

-What is on at the Covent Garden these days?

-How much are the tickets to the Odeon?

-How can I get to Oxford Street from here?

-Where is the nearest underground station?

-Where is it better to have a bite in London?

I. Doing the Sights. Museums.

Today we have learnt and summarised  a lot. We talked, listened and watched about London – the treasure of Great Britain. You have done a lot of tests, London quiz, you have listened to the presentation of your classmates. You were industrious and worked hard. I’m satisfied with your activity and your results in work. Many thanks for your hard work. The lesson is over. Good-bye.