Позакласний захід, QR-квест-гра "William Shakespeare. Оne of the greatest and the most famous writers of the world"

William Shakespeare. Оne of the greatest and the most famous writers of the world

Objectives: to motivate students’ speaking skills based on learnt material;

My mistress' eyes are nothing like the sun;
Coral is far more red than her lips' red;
If snow be white, why then her breasts are dun;
If hairs be wires, black wires grow on her head.
I have seen roses damask'd, red and white,
But no such roses see I in her cheeks;
And in some perfumes is there more delight
Than in the breath that from my mistress reeks.
I love to hear her speak, yet well I know
That music hath a far more pleasing sound;
I grant I never saw a goddess go;
My mistress, when she walks, treads on the ground:
And yet, by heaven, I think my love as rare
As any she belied with false compare.

Teacher: As you have noticed today we are going to talk about one of the greatest and the most famous writers of the world W. Shakespeare. So, Welcome to our party devoted to W. Shakespeare.

Pupil 1: W.Shakespeare was born in the family of John Shakespeare and Mary Arden in a well-built house of stone which was two stories high with small windows, cut in the roof. The house is still standing. 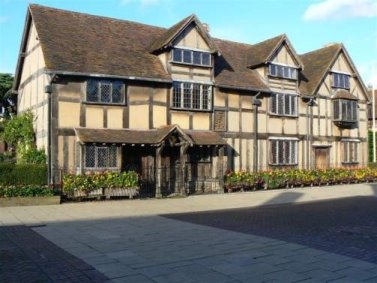 It is a museum. William was the eldest son and third child in the family. Very little is known about his life, especially about his early years. For several years he went to school in Stratford. He studied there for six years and besides reading and writing he was taught Latin and Greek. He left school because his father fell into debts and William had to help him in the trade. It is known that his father was a man of some importance in Stratford. He was one of the town officers and a dealer in products of the farm. 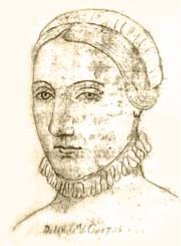 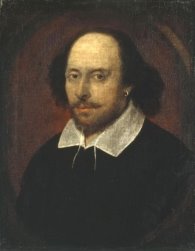 Pupil 2: When William was little more than eighteen he married Anne Hathaway, the daughter of a respectable family. It is said that his marriage was not a happy one. Anne was eight years older than her husband. They had a daughter Susanna and twins Hamnet and Judith. Without friends and money William became known as a writer only in 1593. In all he was the author of over thirty plays, two poems and 154 sonnets. 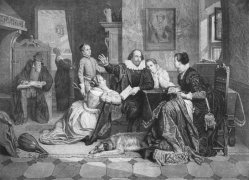 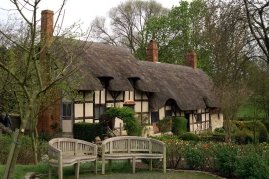 Pupil 4: Although Shakespeare made London his home, he probably often visited Stratford, where his family continued to live. Shakespeare bought the largest house in his native town in 1597, paid his father’s debts, but he didn’t spend much time in Stratford. In 1611, at the height of his fame, he returned to Stratdord. He died at the age of 52 and was buried in a fine old Parish Church at Stratford. It was Shakespear’s own request to bury him in Stratford. His body was buried in Stratford, not in Westminster Abbey where there are tombs of many famous English writers and poets. 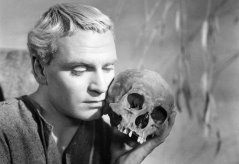 Pupil 5Among the most famous of his plays are the tragedies of Romeo and Juliet, Julius Caesar, Hamlet, Othello, King Lear, and Macbeth, the comedies of Midsummer Night’s Dream, The Merchant of Venice, and the historical plays Richard III and Henry V. Many well-known expressions come from Shakespeare, and his work is famous for its sensitive view of human nature and for the richness of its language. Shakespeare also wrote some very good poetry, especially the Sonnets.

Teacher: We are sure that you know a lot about W. Shakespeare. Now we are going to continue to talk about Shakespeare in unusual way. We want you to  answer some questions. But before that you have to find them, looking for around the school, decrypt the code using your devices and write the answers on your sheets. The first group with right answers will be the winner.

Our party is over. And try to be more patient towards others and let’s learn to forgive because only those will be forgiven who know how to forgive themselves.

What have you learned today?

What can you do now?