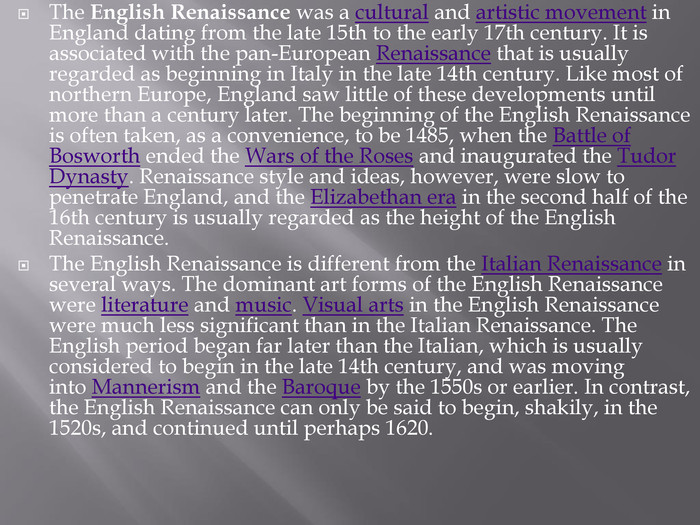 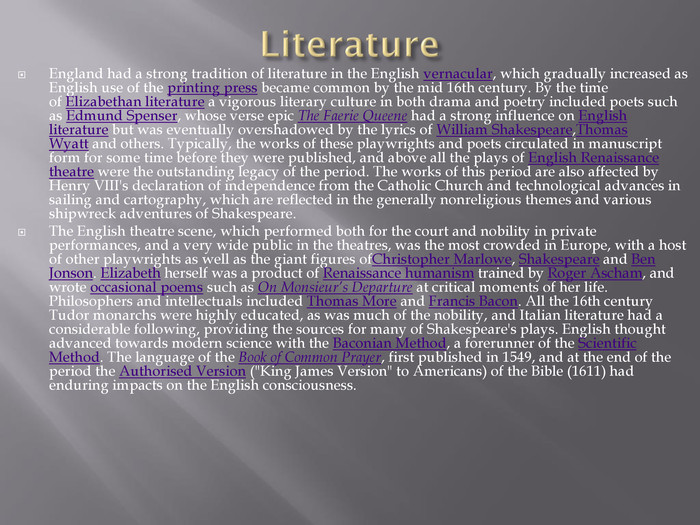 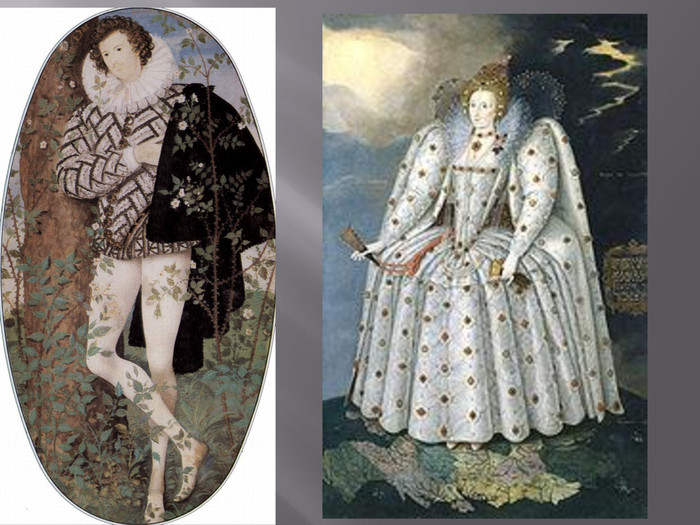 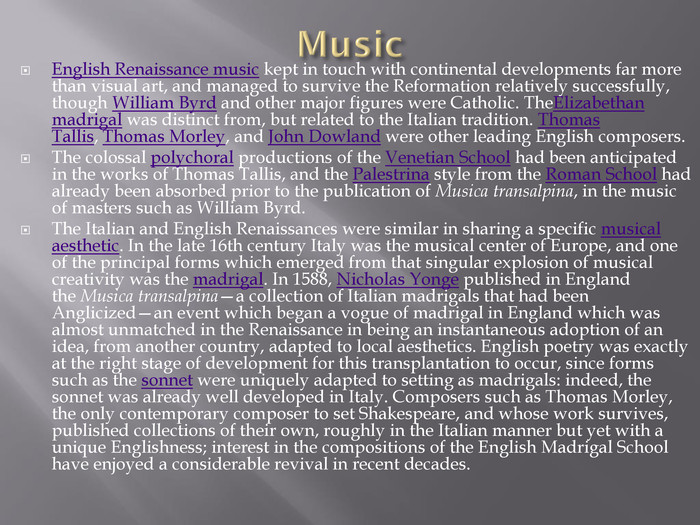 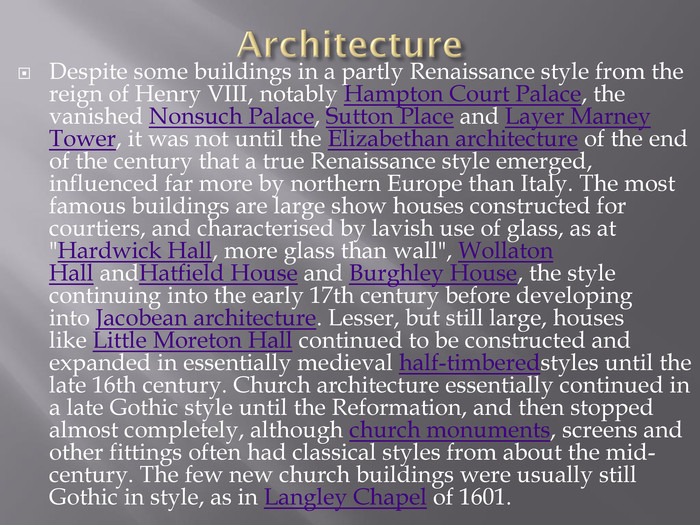 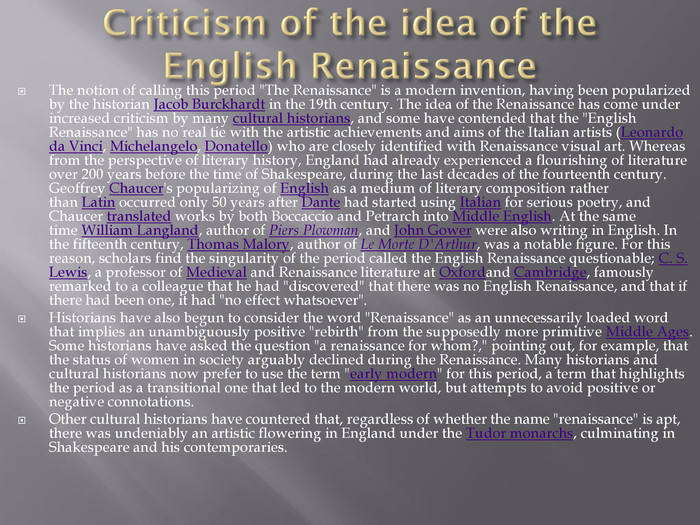 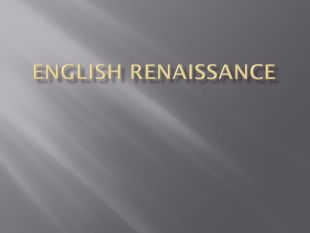 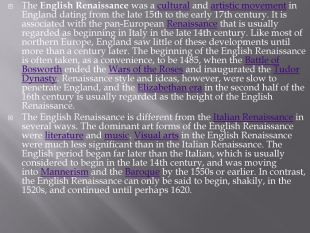 Literature. England had a strong tradition of literature in the English vernacular, which gradually increased as English use of the printing press became common by the mid 16th century. By the time of Elizabethan literature a vigorous literary culture in both drama and poetry included poets such as Edmund Spenser, whose verse epic The Faerie Queene had a strong influence on English literature but was eventually overshadowed by the lyrics of William Shakespeare,Thomas Wyatt and others. Typically, the works of these playwrights and poets circulated in manuscript form for some time before they were published, and above all the plays of English Renaissance theatre were the outstanding legacy of the period. The works of this period are also affected by Henry VIII's declaration of independence from the Catholic Church and technological advances in sailing and cartography, which are reflected in the generally nonreligious themes and various shipwreck adventures of Shakespeare. The English theatre scene, which performed both for the court and nobility in private performances, and a very wide public in the theatres, was the most crowded in Europe, with a host of other playwrights as well as the giant figures of. Christopher Marlowe, Shakespeare and Ben Jonson. Elizabeth herself was a product of Renaissance humanism trained by Roger Ascham, and wrote occasional poems such as On Monsieur’s Departure at critical moments of her life. Philosophers and intellectuals included Thomas More and Francis Bacon. All the 16th century Tudor monarchs were highly educated, as was much of the nobility, and Italian literature had a considerable following, providing the sources for many of Shakespeare's plays. English thought advanced towards modern science with the Baconian Method, a forerunner of the Scientific Method. The language of the Book of Common Prayer, first published in 1549, and at the end of the period the Authorised Version ("King James Version" to Americans) of the Bible (1611) had enduring impacts on the English consciousness. 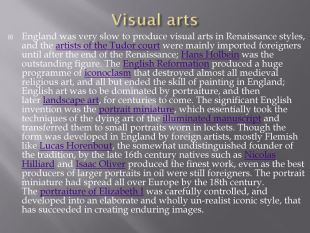 Visual arts. England was very slow to produce visual arts in Renaissance styles, and the artists of the Tudor court were mainly imported foreigners until after the end of the Renaissance; Hans Holbein was the outstanding figure. The English Reformation produced a huge programme of iconoclasm that destroyed almost all medieval religious art, and all but ended the skill of painting in England; English art was to be dominated by portraiture, and then later landscape art, for centuries to come. The significant English invention was the portrait miniature, which essentially took the techniques of the dying art of the illuminated manuscript and transferred them to small portraits worn in lockets. Though the form was developed in England by foreign artists, mostly Flemish like Lucas Horenbout, the somewhat undistinguished founder of the tradition, by the late 16th century natives such as Nicolas Hilliard and Isaac Oliver produced the finest work, even as the best producers of larger portraits in oil were still foreigners. The portrait miniature had spread all over Europe by the 18th century. The portraiture of Elizabeth I was carefully controlled, and developed into an elaborate and wholly un-realist iconic style, that has succeeded in creating enduring images. Music. English Renaissance music kept in touch with continental developments far more than visual art, and managed to survive the Reformation relatively successfully, though William Byrd and other major figures were Catholic. The. Elizabethan madrigal was distinct from, but related to the Italian tradition. Thomas Tallis, Thomas Morley, and John Dowland were other leading English composers. The colossal polychoral productions of the Venetian School had been anticipated in the works of Thomas Tallis, and the Palestrina style from the Roman School had already been absorbed prior to the publication of Musica transalpina, in the music of masters such as William Byrd. The Italian and English Renaissances were similar in sharing a specific musical aesthetic. In the late 16th century Italy was the musical center of Europe, and one of the principal forms which emerged from that singular explosion of musical creativity was the madrigal. In 1588, Nicholas Yonge published in England the Musica transalpina—a collection of Italian madrigals that had been Anglicized—an event which began a vogue of madrigal in England which was almost unmatched in the Renaissance in being an instantaneous adoption of an idea, from another country, adapted to local aesthetics. English poetry was exactly at the right stage of development for this transplantation to occur, since forms such as the sonnet were uniquely adapted to setting as madrigals: indeed, the sonnet was already well developed in Italy. Composers such as Thomas Morley, the only contemporary composer to set Shakespeare, and whose work survives, published collections of their own, roughly in the Italian manner but yet with a unique Englishness; interest in the compositions of the English Madrigal School have enjoyed a considerable revival in recent decades. 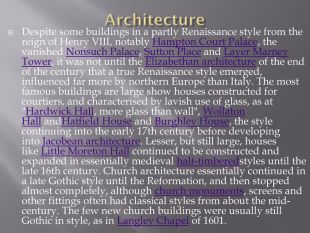 Architecture. Despite some buildings in a partly Renaissance style from the reign of Henry VIII, notably Hampton Court Palace, the vanished Nonsuch Palace, Sutton Place and Layer Marney Tower, it was not until the Elizabethan architecture of the end of the century that a true Renaissance style emerged, influenced far more by northern Europe than Italy. The most famous buildings are large show houses constructed for courtiers, and characterised by lavish use of glass, as at "Hardwick Hall, more glass than wall", Wollaton Hall and. Hatfield House and Burghley House, the style continuing into the early 17th century before developing into Jacobean architecture. Lesser, but still large, houses like Little Moreton Hall continued to be constructed and expanded in essentially medieval half-timberedstyles until the late 16th century. Church architecture essentially continued in a late Gothic style until the Reformation, and then stopped almost completely, although church monuments, screens and other fittings often had classical styles from about the mid-century. The few new church buildings were usually still Gothic in style, as in Langley Chapel of 1601. 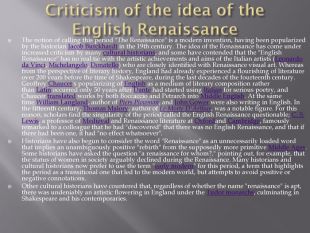 Criticism of the idea of the English Renaissance. The notion of calling this period "The Renaissance" is a modern invention, having been popularized by the historian Jacob Burckhardt in the 19th century. The idea of the Renaissance has come under increased criticism by many cultural historians, and some have contended that the "English Renaissance" has no real tie with the artistic achievements and aims of the Italian artists (Leonardo da Vinci, Michelangelo, Donatello) who are closely identified with Renaissance visual art. Whereas from the perspective of literary history, England had already experienced a flourishing of literature over 200 years before the time of Shakespeare, during the last decades of the fourteenth century. Geoffrey Chaucer's popularizing of English as a medium of literary composition rather than Latin occurred only 50 years after Dante had started using Italian for serious poetry, and Chaucer translated works by both Boccaccio and Petrarch into Middle English. At the same time William Langland, author of Piers Plowman, and John Gower were also writing in English. In the fifteenth century, Thomas Malory, author of Le Morte D'Arthur, was a notable figure. For this reason, scholars find the singularity of the period called the English Renaissance questionable; C. S. Lewis, a professor of Medieval and Renaissance literature at Oxfordand Cambridge, famously remarked to a colleague that he had "discovered" that there was no English Renaissance, and that if there had been one, it had "no effect whatsoever". Historians have also begun to consider the word "Renaissance" as an unnecessarily loaded word that implies an unambiguously positive "rebirth" from the supposedly more primitive Middle Ages. Some historians have asked the question "a renaissance for whom?," pointing out, for example, that the status of women in society arguably declined during the Renaissance. Many historians and cultural historians now prefer to use the term "early modern" for this period, a term that highlights the period as a transitional one that led to the modern world, but attempts to avoid positive or negative connotations. Other cultural historians have countered that, regardless of whether the name "renaissance" is apt, there was undeniably an artistic flowering in England under the Tudor monarchs, culminating in Shakespeare and his contemporaries. 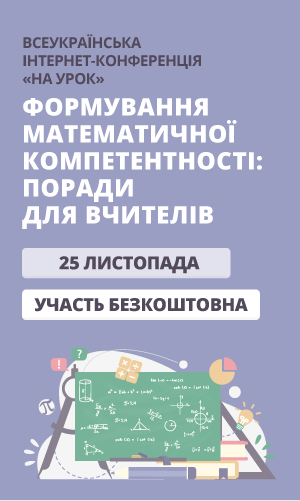