Topic: Daniel Defoe is the founder of a realistic novel.Robinson Crusoe

T .  The history of England in the second half of the 17th century and during all the 18th century was marked by the British colonial expansion and the struggle for leading role in commerce. The writers of this age protested against the survivals of feudalism in which they saw the main evils of the time.

The characteristic features of the Enlightenment were much the same all over Europe.
• A deep hatred of feudalism
• A love of freedom and systematic education for all
• A concern about common people and the peasants in particular.

This period saw the remarkable rise in literature. People wrote on many subjects and made great contribution in the fields of philosophy, history, natural sciences and a new science of the political economy.

A new literary form, such as literary prose, appeared. The period of the Enlightenment in the English literature is presented by Daniel Defoe, Jonathan Swift, Robert Burns.

1.So today we are going to talk about one of the greatest representatives of the English Enlightment literarture - Daniel Defoe 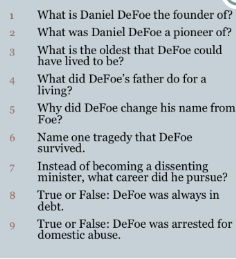 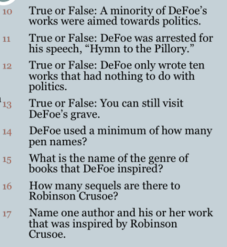 2.So, you see that D.D. was a bright and outstanding person, and I am sure you know a lot about his most remarkle work – Robinson Crusoe

Have you read it? What do you know about this book?

Do you enjoy being alone or do you prefer being around other people? Why?

How would you feel if you were left on a desert island?

Is R.C. a true story or is it a fiction? What makes you think so?

Read the text, on the blackboard write out the key words in order the opponent group could guess what your text is about and could choose the best heading for your text , and after that using the words – retell your text.

Variants of the headings: 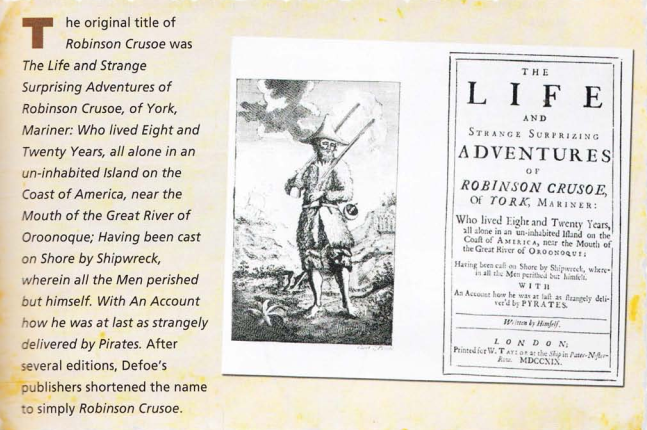 1)unscramble the sentences and answer the questions:

Make a small dialogue between a Turkish captain , who became Robinson’s master and Robinson Crusoe, his slave.

“… for two long years I lived the life of a slave. I worked in the house and the garden , and every day  planned to escape , but it was never possible…..”

summing up
T. It was a very interesting journey together with Robinson Crusoe. And I am sure you’ve learnt a lot about the writer and the work that made him famous.

Home assignment
T. Your homework will be to write a short composition.
“IF I WERE on a desert island …(10–15 sentences).