1) Do you think you have a strong personality?

2) What personality types are you attracted to?

3) What word would sum up your personality?

4) What are the personality differences between you and other family members?

In small groups, describe the “ideal" partner for you. Think in terms of personality, educational and family background, socioeconomic level, job, and personal values and beliefs. (Checking the homework)

Read the information from the Internet and discuss the following items using Useful Phrases on p. 11.

1) How can you describe the relationships between parents and children in our country?

2) Are they similar to those ones which are described in the article?

3) What is your opinion as for relationships between parents and children?

4) How should people behave to keep peace in their families?

PARENT-CHILD RELATIONSHIP IN ISLAM Islam recognizes family as a basic social unit. Along with the husband-wife relationship the Parent-child relationship is the most important one. To maintain any social relationship both parties must have some clear-cut Rights as well as obligations.

It is clear that after Allah parents are the persons who provide protection, food and clothing to the newly born. The mother sacrifices her comforts and sleep to provide comfort to her children. The father works hard to provide for their physical, educational and psychological (and spiritual) needs. It is a matter of common courtesy that if a person does you some favor you feel obliged to him.

This story shows how service to one's parents leads to blessings from God and rescue from troubles. Now let us summarize the Rights of Parents (Duties of children):

Right to scold and rebuke: It is instinctive obligation of parents to protect their children from physical and moral harm. They may resort to advice, rebuke, scolding, even hitting them. Good children should take all this 'harshness' in their own interest. If parents scold them they should bear it calmly. No rude replies, no arguing, no explanations, no comments unless asked for. Parental advice should be listened to and acted upon, even if against children's own wishes.

Right to be looked after. Parents have looked after the children for decades. So it is the duty of grown-up children to repay them by way of caring for them and looking to their physical and financial needs.

Right to be helped: As parents grow old their energies also decline. So it is the duty of child­ren to help their parents in any household chore in which they can help. With good children such help should come automatically, not when asked for. This is what Islam expects from children.

Right to kind words / good behaviour: Muslims expect their children to show respect, obedience, kindness, le­niency and care towards parents, especially in their old age. Children must not forget the favors and sacrifices of their parents. As good mannered per­sons they must feel and remain obliged towards parents and try to repay them by kind words and deeds, even with money and material needs.

RIGHTS OF CHILDREN Now let us see the other side of the coin. Let us see what are the Rights of Children (and Duties of Parents) in Islam. These can be summarized as under: Children have the right to be fed, clothed and protected till they grow up to adulthood. It is, primarily, the duty of the father to do that. Mother can provide help if necessary. Protection means protection against physi­cal as well as moral and intellectual harm. Parents are duty bound to see that the child's personality develops in all fields. So if the parents have to resort to strictness for the sake of disciplining the children and protecting them from intellectually, morally and religiously undesirable behaviour, children should not resent their strictness. Let them perform their duty as parents. Children's duty is not to protest or be rude but to listen and obey.

Right to education. In Islam education is not limited to bookish knowledge but includes moral and religious training also. It means healthy all-round growth of child's personality. Parents must not only provide for children's education in schools and colleges but should also take personal interest in their stu­dies, helping them if they can. This gives children a feeling of 'working with the parents' and encourages them in studies. Parents should sacrifice their own comfort and social activities and must spare some time to take in­terest in children's studies, especially when they are young. Leaving child­ren to the mercy of teachers or tutors is not a wise policy. And of course, parents should not forget or neglect imparting religious/moral training to children. A little sacrifice on part of parents will save children from moral disasters. Effective moral training comes not from sermons, advice and precepts but from parents' personal examples of good behaviour.

Right to love and affection: Children have many psychological needs also. Small children need to be loved, caressed, kissed and hugged. Some parents believe that being frank with children is not good from discipline point of view. This is wrong. Love and le­niency can do much that fear and strictness cannot do. If leniency leads to rude­ness on the part of children it should be mixed with strictness. That will tell the children that parents are basically kind but can be tough if children show rude­ness and bad manners. Over-protection and over-care are undesirable. Let the child grow up as a responsible person. Only provide them guidance.

Right to be well provided (materially) Arabic wisdom says, “It is better for parents to leave their children well provided (financially) than to leave them in poverty". This means that pa­rents should not spend all that they have on their own comforts and luxu­ries but must make provisions for children's welfare after the parents die. These are brief outlines of the Rights and Duties of both parties in the Pa­rent-child relationship.

Fill in the gaps with the new words. (Word file, p. 10 there is a mis­print — to lose touch

6) Novak continued to ____ with the referee throughout the game.

8) A lot of people doubted that I could ____ in business for myself.

Try to retell this story.

Listen to the dialogue and do the task.

Ed. Hey Rocky! You’ve been sitting around all night. Get out and dance with someone like that woman over there.

Rocky. No way! She looks like the intellectual type.

Ed. Oh come on man! What kind of woman do you like?

Rocky. I want a woman who’s affectionate and fulfills my every need, and that woman over there is just not the right type.

Ed. Hey. Where have you been? Times are changing, and you’re never going to find a woman who will shine your shoes and pick up after you all the time. Wake up.

Rocky. Oh really? I meet a lot of women like that, but not at this party. I also prefer a woman who’ll stay home, cook, clean, and watch the kids.

Ed. Okay, but what are your household responsibilities once you get home from work?

Rocky. Hmm. Eat, watch TV, and throw out the garbage.

Ed. Wait, wait, wait. I can’t believe I’m hearing this. In fact, you’re never going to get married. I recently read a news report that said 40 percent of women don’t think their husbands do their share around the house, and you seem to be that type.

Rocky. Well, that’s the way I am, but what’s YOUR idea of the perfect woman?

Ed. Well, I like a woman who’s outgoing, caring, and non-judgmental about people’s differences, and it bothers me when people think them the center of the universe ... like someone I know.

Rocky. Well, that’s nice for you, but that doesn’t change my point of view. I guess I’ll have to go home to a TV dinner and my dog, Rusty.

Ed. Hey, and if I stick with you, this is going to be a long, lonely night. Say hello to Rusty for me.

1) What was Rocky doing at the beginning of the conversation?

A) eating and drinking

B) dancing to the music

C) standing around at the party

D) talking with his girlfriend, Babe

A) serve him hand and foot.

B) stimulate his intellect.

C) pursue their own careers.

3) In addition to eating, Rocky feels his household chores include:

A) fixing the appliances like the TV and throwing out the trash.

B) washing the car and collecting the trash.

C) watching television and taking out the garbage.

D) fixing things around the house.

4) Rocky acknowledges that his views on women:

A) were shaped by his own family life.

B) are quite progressive for the times.

D) are in line with the prevailing views.

5) From the conversation, what is the most likely scenario of events for the rest of the evening for Rocky?

A) He returns home alone and spends the night with his dog.

B) He remains at the party to try to make new friends.

C) He decides to visit his friend, Rusty, and they have TV dinners.

D) He meets a woman who shares his mutual interest in archeology.

With a partner, take the roles of the two men in this conversation and practice the dialogue.

You may change it a bit and add your own ideas.

Describe the “ideal” partner for you. Think in terms of personality, educational and family background, socioeconomic level, job, and personal values and beliefs. 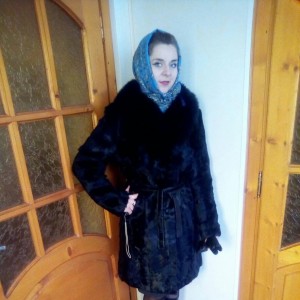