a teacher of English,

-to systematize knowledge on the topic

-to activate the topic-related lexis;

-to increase pupils active involvement in all areas of the language practice;

-to develop the ability to work in different activities (individually, in groups,

-to make the pupils aware of the importance of the subject under discussion;

-to enhance the creative writing;

The Run of the lesson

Aim: to get students ready to perceive the information on the topic, to introduce them the task of the lesson.

T: Dear pupils, today we are going to discuss the main environmental problems endangering us and the solutions to them. You’ll have the chance:

II. Get warmed up!

Aim: to introduce the subject “Environment” through personal responses, to promote working individually, in pairs, in groups. 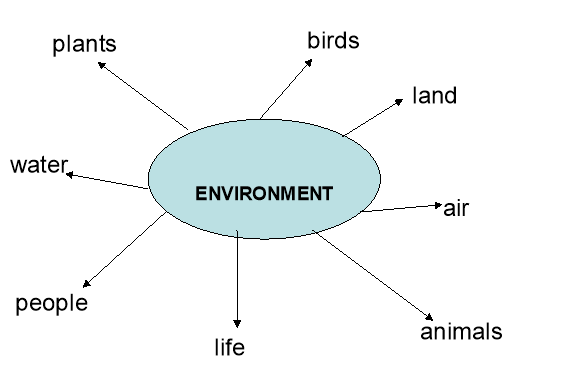 And today we are discussing one of the human’s problem like “Water pollution”.

Can you give any synonym to the word “Water?” (pure, liquid, hydrogen and oxygen)

Did you know that the water we use today is the same water the dinosaurs used? We cannot create new water. For millions of years, the water we have has been used again and again. We have been able to do this because there are natural cycles that clean the water each time we use it.

Aim: to practice vocabulary on the topic “Environment”, the usage of synonyms.

Write the synonyms to the following words. Work in pairs. ( use cards)

To look after = take care 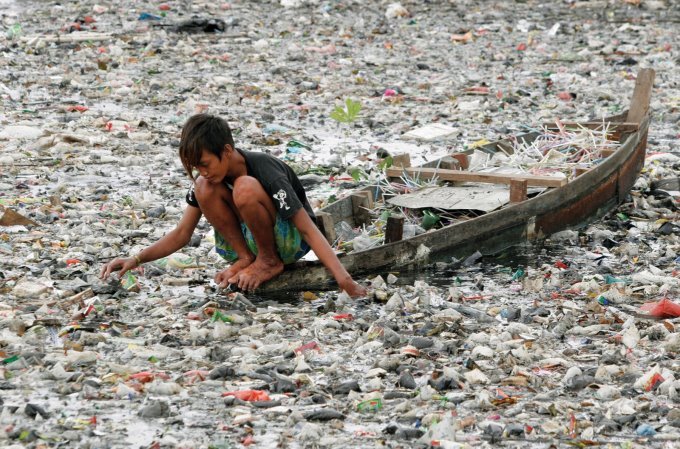 Look at the photo and answer the questions.

People are polluting our water. Businesses and cities dump chemicals and waste products into our rivers, lakes and oceans. People throw trash–furniture, garbage, old tires, cars, old fencing, anything they can think of–into the water. People also pollute the water by accident, by allowing their cars to leak oil and gas onto the ground. That oil and gas eventually washes into the water during rain storms and when people clean their driveways off with water.

Be ready to speak about water pollution. Then fill in the table.

Aim: to give main concepts of the text

The text “Not so plastic fantastic”

What other things can we do instead of using plastic bottles?

What other materials do you think are harmful to the environment?

The while – reading activity

Quickly read the article. Tick two predictions the author clearly makes about the future. Which information in the article do you find most surprising/worrying?

(The author is a marine biologist who is

Read the article again. Are the statement true (T) or false (F)?

Aim: to give practice in identifying main concepts in the text of the film unit, to teach them to perceive not only by listening but combine it with watching.

How is plastic useful for human?

What’s the problem with plastic bottles?

Does it affect marine organisms?

The while – watching activity

How do people pollute the water?

You have to write a leaflet where you give instructions how to prevent pollution.

e.g: There are a lot of things we can do to protect the environment.

Try not to buy pre-packaged food. It creates a lot of rubbish…

Aim: to give practice in listening for specific information

Join Dan and Kate this week as they talk about pollution. How is plastic affecting the environment and what can we do to make the situation better?

Guess!!!  How many pieces of plastic are there in each square kilometre of the world’s oceans? (choose an answer now)

The while – listening activity

Vocabulary - What do the following words mean?

and today I’m joined by Kate.

Dan: Now today Kate and I are talking about pollution.

Kate: Yes, well pollution is the term for harmful waste which has been put into the

environment, and which can be damaging to plants and animals.

Dan: So I’m going to start the show today with a question, Kate; have you ever

Kate: No, I’m afraid I haven’t; I’ve never heard of that.

Dan: Well let me explain: Garbage is an American word for something we’ve

thrown away. What we in the UK might call rubbish. And the Pacific

Garbage Patch is an area of the Pacific Ocean where rubbish has collected. It

was discovered in 1997, and is essentially a big floating soup of plastic

ended up in the sea.

Kate: Ooh that sounds absolutely horrible. I had no idea that anything like that

Dan: Well this is the bit which is really scary: we don’t actually know the size of the

garbage patch, but some people say it could be 600,000 square miles across –

which is twice the size of France.

Kate: What? Twice the size of France? That’s absolutely huge!

Dan: And it could be bigger.

Dan: So this week’s question for you Kate is: According to the United Nations, how

many pieces of plastic are there in each square kilometre of the world’s oceans?

Kate: Well, as I’d never heard of this problem before, I’m going to take a wild guess

Dan: OK, well they’re all pretty big, but we’ll see if you’re right at the end of the

Kate: Now plastic pollution in the seas kills over a million sea birds and 100,000

mammals and turtles each year.

of plastic pollution on birds. You’ll hear the word litter, which is another word

for rubbish. So what sort of litter have the scientists found in birds’ stomachs?

Worldwide, there’s so many bird species that have litter in their stomachs. It varies

from pieces from bottles or toys, parts from fishing nets, from ropes. Any sort of plastic

really that is broken up and is floating around the ocean.

Kate: OK, so the plastics they’re finding aren’t just things that might have been

thrown into the sea, like fishing nets and ropes, but are actually things that

have come from the land, like pieces of bottles and children’s toys.

Dan: Apparently 80% of all the plastic found in the ocean is actually litter that’s

been thrown away on land.

Kate: And part of the problem is that most plastics aren’t biodegradable. What does

Dan: Well, if something biodegrades it means it breaks down naturally. So if a

product isn’t biodegradable it won’t decompose or decay organically. And

some plastic bags could last in the environment for up to a thousand years.

packaging. Packaging is the protective covering used to transport products

and display a company’s image. So let’s have a listen to the extract: what

percentage of plastic produced each year is used for packaging?

I think we need to think very very carefully about the way that we use plastics in society.

If we think that 100 million tonnes of plastic products are made every year, 40% of

those are packaging materials that are mainly used once and then discarded.

Dan: OK, so 40% of the world’s plastic is used as packaging material and then

discarded. Can you explain what discarded means Kate?

Kate: Sure: well to discard something means to throw it away. So if the packaging

is discarded, it means that people throw it away as rubbish or litter, rather

than use it again.

Dan: To lower the amount of plastic waste, scientists recommend the ‘three Rs’ for

packaging. We can reduce the amount of packaging used on products; we can

re-use packaging more than once, and we can recycle the materials used.

Kate: And recycle means to process used materials into new products. So you can

recycle old glass, paper and plastic products to make something new. Do you

Dan: I’m actually very lucky, because where I live in London has a great recycling

programme. So essentially every week we’ve got someone who comes round

entire week, which is fantastic.

have all my plastics and glass picked up outside my house, so I think certain

places in the UK are doing quite well on the recycling front.

Dan: And even if you can’t recycle, just try and reuse or reduce the amount of waste

that you’re going to be producing.

OK, we’re almost out of time, so let’s go over some of the vocabulary we’ve

Dan: And finally Kate, let's go back to today's question. I asked you at the beginning

kilometre of the ocean?

plastic, on average, in each square kilometre of the ocean.

Kate: What? 46,000 pieces of plastic? That’s absolutely incredible! How sad, and

think of the damage that must be doing to the sea life.

Dan: But, hopefully, if we all try and reduce waste, and use less packaging, and

recycle more, then maybe things will get better.

So from all of us here at BBC Learning English, thanks for listening, and

As you can see, our desire and duty is to protect our water. You must realize that saving nature alive and beautiful for our future generations is the duty of mankind.

2) Write an essay “How to protect yourself from water pollution”.