Reading Comprehension   Develop your reading skills. Read the following text and do the comprehension question.

Halloween (also spelled Hallowe'en) is an annual holiday celebrated on October 31. It has roots in the Celtic festival of Samhain and the Christian holy day of All Saints.

Halloween has origins in the ancient festival known as Samhain, which is derived from Old Irish and means roughly "summer's end". This was a Gaelic festival celebrated mainly in Ireland and Scotland.This festival celebrates the end of the "lighter half" of the year and beginning of the "darker half", and is sometimes regarded as the "Celtic New Year".The celebration has some elements of a festival of the dead. The ancient Celts believed that the border between this world and the Other world became thin on Samhain, allowing spirits (both harmless and harmful) to pass through. The family's ancestors were honored and invited home whilst harmful spirits were warded off. It is believed that the need to ward off harmful spirits led to the wearing of costumes and masks. Their purpose was to disguise oneself as a harmful spirit and thus avoid harm.

But where does the origin of the name "halloween" come from? Well The term Halloween, originally spelled Hallowe’en, is shortened from All Hallows' Even – e'en is a shortening of evening. It is now known as "Eve of" All Saints' Day, which is November 1st. As Chritianity started to spread, the church tried to supplant these pagan festivities with the Christian holiday (All Saints' Day) by moving it from May 13 to November 1. Although All Saints' Day is now considered to occur one day after Halloween, the two holidays were once celebrated on the same day.

Halloween is also related to A jack-o'-lantern (sometimes also spelled Jack O'Lantern) which is typically a carved pumpkin. In a jack-o'-lantern, typically the top is cut off, and the inside flesh then scooped out; an image, usually a monstrous face, is carved onto the outside surface, and the lid replaced. At night, a light is placed inside to illuminate the effect.

Trick-or-treating is a customary celebration for children on Halloween. Children go in costume from house to house, asking for treats such as candy or sometimes money, with the question, "Trick or treat?" The word "trick" refers to a (mostly idle) threat to perform mischief on the homeowners or their property if no treat is given. In some parts of Ireland and Scotland children still go guising. In this custom the child performs some sort of show, i.e. sings a song or tells a ghost story, in order to earn their treats.Начало формы 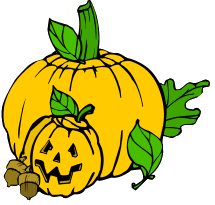 Try this Halloween quiz. You can also develop your reading skills.

Read a text about Halloween and do the comprehension question

Do the following quiz:

The scent of Garlic  - b 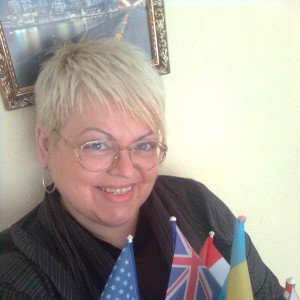