I. Read the rhyme and try to guess what it’s about.

My son listens to it

III. Complete the sentences with the wright synonym listen to or hear in the necessary tense form.

IV. Read the text and match the words in bold type with their Ukrainian equivalents.

Music is everywhere in our lives. We hear it on the radio, on TV, on the transport, in the streets, in the shops and cafes, everywhere. People buy tapes, go to different concerts, visit concert halls and opera theaters. For someone music is just a hobby. He or she learns to play a musical instrument at a musical school, sings in choir or tries to compose music. For somebody else it’s a profession. There are professional singers who sing alone or in a group, musicians who play different instruments in orchestras, composers who write music, and conductors who direct choirs and orchestras. The names of the best of them are famous all over the world. People in all countries listen to music by such composers as Bach, Mozart, Beethoven, Chaikovsky. The orchestra of a famous conductor and violin player Vladimir Spivakov has become popular in many countries of the world.

2) Where and when can we hear music?

3) Do you have a favourite band or a singer?

4) Do you play any musical instrument?

5) What musical genres do you know?

6) What are your favourite kinds of music? Why?

8) What kinds of music help you get work done?

9) Have you ever been a member of a band or a chorus?

10) What kind of music is popular in Ukraine? Who are some of well-known Ukrainian musicians?

11) Have you ever gone to a concert of a famous foreign singer or band? What was it like?

VII. Do you know what these musical labels mean? Compare ideas with other people in your class: R&B, gospel, rock & roll, reggae, rap, disco.

A) Now read a short history of rock music. Check your ideas. Can you explain each label?

Rock music in one form or another is now the most popular type of music all over the world. But where did it come from?

Rock began in the USA in the early 1950s. At that time, ‘rhythm and blues’ music was very popular with black Americans. ‘R & B” was a mixture of black religious music (‘gospel’) and jazz. It had strong rhythms that you could dance to and simply, fast lyrics.

But the early 1960s, even rock’n’roll had become old-fashioned. Many of the songs had begun to sound the same. It was at that time that a new group from England became popular: The Beatles.

The Beatles first started by singing Americans style songs, but they soon developed their own style, with more complicated melodies. They also introduced different instruments, such as the Indian sitar: groups like The Beatles had a very important influence on the style of popular music. By the early 1970s, rock’n’roll had developed into a new form of music. Electronics had replaced the amplified guitar and drums of rock’n’roll. ‘Rock’ had arrived.

C) Work in pairs. Make notes about the following things. Then tell your partner what the text says.

Student B: The Beatles, the early 1970, Rock music today.

Do you remember what we use the Past Perfect for? Study these sentences:

2. By the beginning of the 1960s, rock’n’roll had become old-fashioned.

3. Many of the songs had begun to sound the same.

VIII. Read more about The Beatles and complete the text with the Past Perfect. Use the list of verbs: play, become, change, introduce, experiment, record, sell, make, win.

A very short story of The Beatles

The Beatles were probably the most important pop and rock group of all time. They were together for only 8 years, but their influence has lasted much longer.

The Beatles came from Liverpool, England. They started playing together in 1962, although Paul McCartney and John Lennon 1) _____ together in another group. They started by playing rock’n’roll songs, but they quickly developed their own style. By 1963, they 2) _____ Britain’s top rock group. A year later they toured the USA, wher they attracted millions of fans.

IX. Fill in the gaps with a suitable word. Mind that there may be more than one variant.

X. Listen to record and match the performers with the genres of music the play

XI. Complete the sentences with the words from the box.

4. _____ is often played by young people with brightly coloured hair.

7. _____ usually offers simple tunes which are popular for a long time.

10. _____ comes from a specific region and usually popular for a long time. 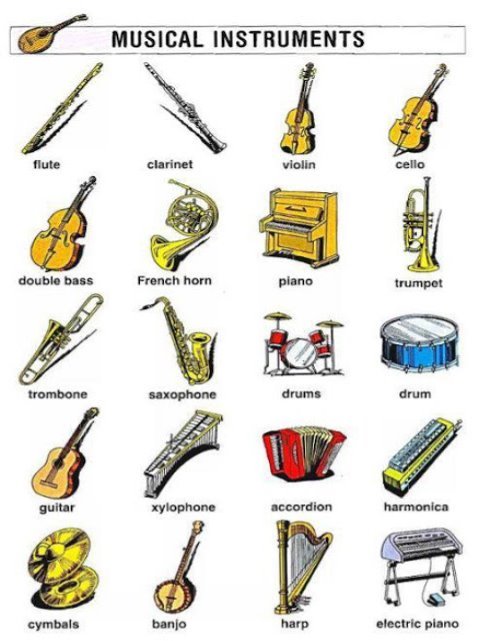 B) Listen. Which instrument can you hear?

He played the saxophone in a jazz band.

Pete played the drums in a pop group.

She accompanied me on the piano.

1) A recording of a performance, piece of music, speech etc.

2) A musical instrument that has four strings and is played with a bow.

3) A person who writes music.

4) Classical music written for a small group of instruments.

5) A long piece of music written for an orchestra.

6) The traditional song handed down though many generations of common people from a century or region.

7) Someone who is good at singing, playing a musical instrument, or writing musical compositions.

8) Having to do with a certain kind of music, such as symphonies.

10) A special disk that is used to copy and save music, words or other sounds for listening to later.

XV. Fill in the words from the box.

The Power of MTV

MTV is a satellite and cable _____ network which plays pop videos and _____ 24 hours a day. Because of MTV, videos dominate the pop market, and this is a new challenge for _____. These days almost all successful pop stars are expected to _____ in front of the camera by their managers who make them do it in order to sell _____ to a world market. Some people in the _____ business argue that video mustn’t _____ to become too important. They worry that pop video may help people who can dance but have no _____ ability, to become _____ just because they hire the right _____ for their videos. This criticism doesn’t worry kids very much; they watch MTV all the same, no matter what quality the _____ are. MTV has plenty of _____ and over 80 million subscribers all over the world. Kids want MTV.

Lewis: Hi! How are you today?

Lewis: Do you want to hear my new CD? Listen. How do you find it?

Lewis: Well, I think it’s awful! It was a free gift with a magazine. What type of music do you like?

Lewis: Can you give me some examples?

Lewis: That’s interesting. I like playing the guitar. Do you play a musical instrument?

Lewis: What is your favourite instrument?