Урок на тему "My motherland: the place where I live - the place I love the most"

- to develop students' speaking and listening skills on the basis of the given material;

- to enrich students' knowledge about Ukraine, its history, places of interest;

-to teach them to love Motherland.

My motherland: the place where I live - the place I love the most

- to develop students’ speaking and listening skills on the basis of the given material;

- to enrich students’ knowledge about Ukraine, its history, places of interest;

-to teach them to love Motherland.

Equipment:  a text for listening, a slide show, a video “Welcome to Ukraine”, a song “Motherland”

T: Good morning, students. I’m glad to see you. You look wonderful today. Please, face and smile each other. Thank you. Now, I hope you feel comfortable.

"Motherland"
Where in the hell can you go far from the things that you know
Far from the sprawl of concrete that keeps crawling its way about 1,000 miles a day?
Take one last look behind, commit this to memory and mind.
Don't miss this wasteland, this terrible place.
When you leave keep your heart off your sleeve.

Motherland cradle me, close my eyes, lullaby me to sleep.
Keep me safe, lie with me, stay beside me don't go.
Don't you go.
Oh, my five & dime queen tell me what have you seen?
The lust and the avarice, the bottomless, cavernous greed, is that what you see?

Motherland cradle me, close my eyes, lullaby me to sleep.
Keep me safe, lie with me, stay beside me don't go.

It's your happiness I want most of all and for that I'd do anything at all, oh mercy me!
If you want the best of it or the most of all, if there's anything I can do at all.
Now come on shot gun bride what makes me envy your life?
Faceless, nameless, innocent, blameless and free, what's that like to be?

Motherland cradle me, close my eyes, lullaby me to sleep.
Keep me safe, lie with me, stay beside me don't go.
Don't go.

T: What is this song about? What is the main idea of the lyrics?

T: So as you have understood, today we are going to speak about our Motherland. The country you were born in, your native town, the house you live in, the snowball tree in your granny’s garden and your mother’s song.

Every year lots of tourists visit our country. What do you think why they visit Ukraine?

Now let’s watch the video “Welcome to Ukraine” and complete the mind-map.

Discussion.  What does it mean “to love Motherland”?

- It means to love our parents.

- It means to love the beauty of the country nature.

- It means to respect our culture, traditions.

- It means to know our history.

- It means to know our mother tongue.

-It means to love our native villages and towns.

T: Your homework was to prepare some information about your native town Borshchiv. (Pupils tell about Borshchiv) 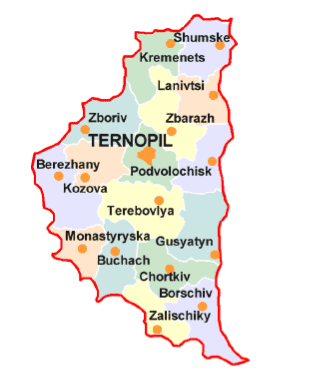 Pupil 2: This region is part of the historical Galicia region, which is split between Poland and Ukraine. Galicia was part of Austria between the years 1772 to 1918 and then in 1920 it became part of Poland. This lasted for nineteen years before it became part of the Soviet Union. Then, in 1991, after the cold war, the USSR was dissolved and now Galicia is part of Ukraine and is the district center in Ternopil oblast.

Pupil 3: You can travel to Borshchiv from Ternopil using either road or train as a form of transport. These forms of transport will provide you with enjoyable opportunities for sightseeing in the Ternopil countryside and is definitely the best way to get to Borshchiv. It should take you approximately 2 to 3 hours.

Pupil 4: Borshchiv is a lovely, historical town to visit with so much available to keep visitors in the town entertained. Something you must see when you are in Borshchiv is the Borshchiv Roman Catholic Church. The Roman Catholic Church was built in the 18th century out of bricks. The layout of the church looks similar to a cross. The Ukrainian church has a tower, which was built for defense in the 17th century. The church was originally part of an ancient castle and so a defense tower was necessary. Interestingly, when the church tower was built, three layers of bricks were used at the bottom to give the tower more strength. The higher the tower was built the less the layers became because the strength was needed at the bottom and not at the top. The upper layers of the tower were completed using a baroque style.

T: What is Borshchiv famous for?

Possible answer: Our town is famous for embroidery.

T: Yes, you are right. And now you’ll listen to the text about Borshchiv embroidery.

BORSHCHIV EMBROIDERY: PAST AND PRESENT

Ukrainian embroidery occupies an important place among the various branches of Ukrainian decorative arts. Embroidery has a rich history in Ukraine, and has long appeared in Ukrainian folk clothes. Spreading over the territory of the country, Ukrainian embroidery varies depending on the region of origin. Embroidery has encoded symbols and power, rooted in the depth of Tripoli culture. These findings have been found by scientists, because of similar patterns found on dishes and other items of Trypilians.

An embroidered shirt is one of the most spectacular elements of the national costume which helps to look into the past, discover the mystery and magic of folklore often marked by a hidden deep - seated wisdom, philosophical attitude to life and the course of time. The Borshchiv embroidery shirt is unique, because it is impossible to find the same embroidery in Ukraine.

There are two explanations why the Borshchiv shirts where embroidered with the black thread. The ancient legend says that the dominant black embroidery is associated with attacks of Turks and Tatars. After one of attacks they killed all the men in several villages of Naddnistrivia. Then the girls and women weeping over their bitter fate, vowed to mourn for the dead beloveds and get married in shirts embroidered with black thread for generations. The black thread is also the symbol of Ukrainian fertile ground. Borshchiv "black" shirts were sewn of carefully bleached hemp canvas. If unassuming linen does not avoid clay and sand, the hemp requires fertilized land and being fat. Actually rich black soil of Podillia produced the best variety of hemp in Ukraine.

Despite the diversity of Borshchiv embroidery, clearly framing system for placing patterns on the sleeves was worked - out. The upper part was the most densely sewn and was called ustavka; under ustavka one can see morshchynka that is pidustavkova stripe of embroidery and ornamentation of the sleeves till the wrist, which in different villages of the district had specific names.

Vira Matkovska - known in the Ternopil area and abroad is a collector of Borshchiv national clothes. Now her collection consists of fifteen hundred women’s and men’s embroidered shirts, skirts, fur coats and zapasok. At first, Vira Matkovska bought shirts at markets. Some shirts are gifts of friends and different people. Sometimes the collector goes on so-called mini-expeditions to buy some interesting kind of the shirt. Then she often has to wash and clean and restore the lost pieces of embroidery.

1. Embroidery has a poor history in Ukraine.

2. An embroidered towel is one of the most spectacular elements of the national costume.

3. The Borshchiv embroidered shirt can be found in any region of Ukraine.

4. The ancient legend says that the dominant black embroidery is associated with attacks of Poles and Tatars

1. What place does embroidery occupy in Ukrainian decorative arts?

2. What is one of the most spectacular elements of the national costume?

3. Why is the Borshchiv embroidered shirt unique?

4. Why were the Borshchiv shirts embroidered with the black thread?

5. Where are the elements of Borshchiv embroidery used?

T: You have been working on the project “Ukrainian embroidery” for some time. Now I want you to represent the results of you work in the class. ( slide-show)

T: Let’s play the game “Brain – ring”. I’ll ask you some questions about Ukraine and you should answer as quickly as possible.

T: If you were a president what would you change in Ukraine?

P: If I were a president I would …

T: Our lesson is over. Thank you for taking an active part in it. Your projects were very interesting and useful. It was a great pleasure to listen to you. You deserve a lot of praise for your answers. Good for you.

T: At home you’ll write a short composition under the following title «He who loves not his country, can love nothing». You may be free. See you later. Have a nice day! Good-bye!