Урок по Шекспіру "To be or not to be"

Тeacher. Can you name any plays by William Shakespeare? Have you seen any on TV? Or in the cinema or theatre?

Тeacher. You can work in small groups  for 2 minutes noting down all your associations with Shakespeare.

Тeacher. Now I want you to share your ideas as a class.

The motto of today’s lesson is: «The world is a stage and people are merely actors» (William Shakespeare).

He got his education at the Grammar School. When he was 18 he married in 1582 to Anne Hathaway and had three children, a daughter and two sons.

They lived in Stratford. At that time actors and actresses visited Stratford-on-Avon. He liked to watch them. He was fond of their profession and decided to become an actor. In 1591 he went to London. There he became an actor and began to write plays too. He worked in the modern theatre “Globe”. 14 years later he became a part owner of the Globe theatre in London.

Actresses were unknown on the stage, and all women's parts were played by boys or young men.

He wrote 37 plays altogether. Among his plays there are historical dramas, comedies, great tragedies, romantic dreams. He’s also known as the author of 2 long poems and 154 sonnets.

B. a grammar school

B. tragedies and comedies

Teacher. Shakespeare’s works have great influence on English. Many sayings and quotations came from his works. Many of his expressions have become part of the language. These sayings are known to everybody and they are widely used.

2) “All the world’s a stage, and all the men and women merely players.”

3) “Have more than you show. Speak less than you know.”

3. His father John Shakespeare lived in…

4. William was the third child …

The Capulets and the Montagues lived in Verona. The two families hated each other. One day the Capulets had a dance. Romeo, a young Montague, went to the dance wearing a mask, but he was recognized. It was there that he first saw Juliet, Capulet's daughter. It was love at first sight.
After the party, Romeo went to hide in the bushes under Juliet's window. Juliet came out onto her balcony. She, like Romeo, had fallen in love with her father's greatest enemy.

Romeo heard her talking to herself about her love for him, and he came out of the bushes. He stood under the balcony and asked her to marry him. Juliet was afraid and begged him to leave, but first she agreed to marry Romeo the next day.

Romeo and Juliet were married secretly by a priest called Friar Laurence. Juliet's cousin Tybalt wanted to fight Romeo. Romeo refused because he had just married Juliet. Later, however, Tybalt killed Romeo's best friend so Romeo fought and killed Tybalt. Romeo had to leave Verona because he had killed Tybalt. While he was away, Juliet's father decided she had to marry another man in three days' time. Juliet did not know what to do. She went to see Friar Laurence and together they made a plan. Juliet would pretend to kill herself. Laurence would then take her 'body' to a safe place and Romeo would join her.

Romeo did not know about the plan and he was so upset when he received the news that Juliet was dead that he bought some poison and rushed to Juliet's tomb. There he drank the poison. When Juliet woke up, Romeo was already dead. Juliet took Romeo's knife and pressed it into her heart.

When they realized what had happened the fathers were very sad and ashamed. As a result of the tragedy the two families became friends forever.

D:  Who's there? Othello?
О:  Yes, Desdemona.
D: Will you come to bed, my lord?
O: Have you prayed tonight, Desdemon?
D: Yes, my lord. Alack, my lord, what may you mean by that?
O: Think of your sins.
D: They are loves I bear to you. But what's the matter?
O: That handkerchief which I so loved and gave you, You gave to Casio.
D: No, by my love and sole. Send for the man and ask him.
O: Therefore confess you freely of your sin,
I wouldn't kill you unprepared spirit. I say, amen.
D: I never did offend you in my life; Never loved Casio, I never gave him token.
O: By heaven, I saw my handkerchief in his hand. О perjured woman! You broke my heart.
D: He found it then. I never gave it him. Send for him here. Let him confess a truth.
O: He had confessed. And he is dead.
D: Alas, he is betrayed and I undone.
O: Down, strumpet, being done, there is no pause.
D: But banish me , my lord, but kill me not! Kill me tomorrow: let me live tonight!
O: It is too late...
D: But while I say one prayer!
O: Lord, Lord, Lord!

3. What language did William Shakespeare speak? – He spoke English.

5. Shakespeare was a great English playwright, wasn’t he? – Yes, he was. 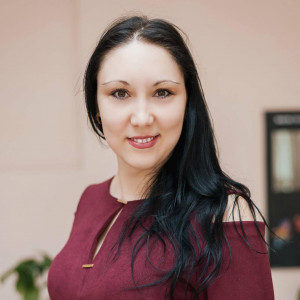