2. What is the remarkable feature in the design of the Cathedral?

a) many bell towers;

3. Where is Massandra Palace situated?

4. Which attractions can you see outside the palace?

Task 2. Watch Video “Palanok Castle” and “The Saint Michael Monastery”; then distribute the statements to the corresponding column.

Task 4. Watch video “The Swallow's Nest”. Fill in the gaps.

Task 5. Watch video “Khotyn Fortress” and decide whether the statements are true or false: 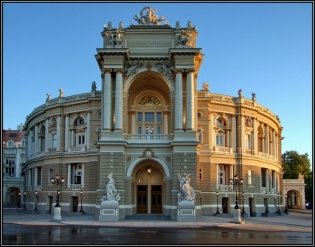 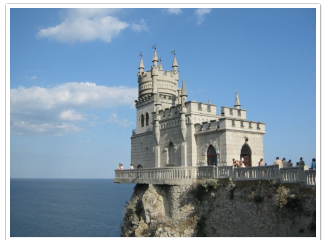 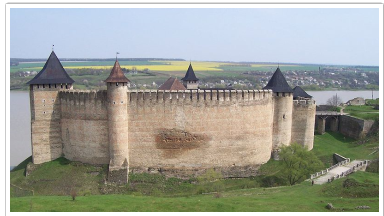 Task 2. Watch Video “Palanok Castle” and “The Saint Michael Monastery”; then distribute the statements to the corresponding column.

Task 4. Watch video “The Swallow's Nest”. Fill in the gaps.

Task 5. Watch video “Khotyn Fortress” and decide whether the statements are true or false:

The Kharkov Annunciation Cathedral stands righteously amidst the horizon of Kharkov, Ukraine. At over 100 years-old, and standing a striking 80 meters tall, is the bell towers which adorn this monumental cathedral. The cathedral once reigned as the largest in all of the former Russian empire. This goliath cathedral holds a superb fresco modeled after the Saint Vladimir Cathedral. Resembling the style of ancient empires, the contrasting brick design makes this building a work of stunning art. The beauty of the jewel of the Kharkov skyline is a focal point for visitors and residents of this strikingly historic city.

In the picturesque town of Massandra, sits the gorgeous Massandra Palace. In the southern regions of Crimea, this chateau was completed at the turn of the 20th century. This stunning attraction boasts French architecture in a distinctly Ukrainian setting. Wide vistas and vibrant gardens greet you at every turn, while the art collections and period furniture beckon you inside. This former holiday getaway for Soviet leaders is stirring from every angle. The views, gardens and atmosphere are truly unique in Eastern Europe.

Rising above the green lands of Ukraine's Mukachevo city, lies a modest yet enchanting castle. Palanok Castle is perched on a volcanic hill, overlooking the entire town beneath it. The geographically strategic position it holds made it nearly impregnable. The huge castle complex, spanning around 14,000 square meters, is divided into 3 separate parts - the high, middle, and low castle. Its tall towers, modern roofs, lovely clock towers and over 130 rooms make this structure truly charming. This castle has donned various roles throughout history, including a residence for many noblemen, a prison, as barracks and also an agricultural college.

The Saint Michael Monastery sparkles along the skyline of Kiev in Ukraine. It was nearly 300 years ago that the monastery was initially constructed. The cathedral has a variety of different chimes that ring throughout the community each day. The cathedral holds an array of striking and graceful mosaics. Although the cathedral has endured reconstructions over its lifetime, the essence of this magnanimous structure has been unchanged. The Saint Michael's Golden Domed Monastery serves as a centerpiece to the stunning city of Kiev.

Possibly the most famous center of culture in Odessa, Ukraine is the Odessa Opera Theater. This grand building was built in 1887 to replace the theater that was lost in a fire in 1873. The spacious interior has impressed countless visitors and theater-goers with its lavish rococo style. The acoustics are designed so that even small sounds on stage will travel across the auditorium. The Odessa Opera Theater's exterior is also richly designed in neo-Baroque style. The grandeur and history of this Opera house makes it one of Ukraine's most treasured landmarks.

Its appearance is that of a fairy-tale castle, looking off a cliff to the sea. The Swallow's Nest is an amazing building, both in its design and its location. The castle is situated 130 feet above the Black Sea, on Aurora Cliff. It was built by Baron Von Steingel in 1911 and was sold just three years later. An earthquake in 1927 cracked the cliff and closed down the castle for forty years. In 1975 it was reopened as a restaurant, truly an amazing dinner location.

Amidst the enlivening landscape of Ukraine, stands a glorious castle. Resting on the banks of Dniester River and the gorgeous green fields of Khotyn is the enigmatic Khotyn Fortress. Built on the site of a previous fort, the structure that stands here today was largely built in the early 14th century. However many additions and renovations were carried out here in the late 14th and 15th centuries. From its beginnings as a medieval fort to the present day fortress, its ownership fell into the hands of several different empires and various countries. Mentioned in the list of Seven Wonders of Ukraine, this gorgeous fortress is a true marvel. 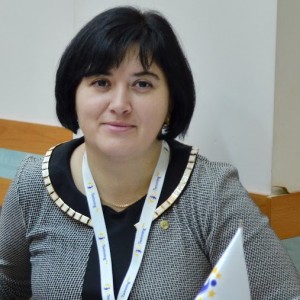