I. Rewrite the following sentences in the passive, beginning with the given words

1.Artists can use the elements of form to generate visual forces that direct our eyes as we view the     work.

2. They devise pathways to encourage transition from one pictorial area to another.

3. The environment and experience of the viewer mentally condition all spatial implications.

5. They are going to judge the painting as if it were an abstract painting

6. Pablo Picasso could have painted this picture

7. They were to create six panels to offer an aesthetic and colorful meeting point.

8. People will install lighting designs within the area of the Rugy works.

9. People have used watercolor for manuscript illumination since at least Egyptian times.

11.  Artists can apply tempera to wood or canvas panels.

12. Artists have used materials such as plaster, wax, oil, acrylic, water, and gum to hold pigment together.

II. Read the text and do the tasks

Painting is one of the oldest and most important arts. Since prehistoric times, artists have arranged colors on surfaces in ways that express their ideas about people, the world, and religion The paintings that artists create have great value for humanity. They provide people with both pleasure and information.

Sometimes artists paint primarily for their own enjoyment or self-expression, choosing their own subjects. Artists may also paint for a supporter called a patron, who commissions a work. A patron may be a private individual or a ruler who wants to decorate a palace or give the painting as a gift. A patron also may be an organization or institution. Religious groups have commissioned works of art to help believers worship and understand their faith. Rulers use art to assert their importance. Governments use painting to teach people about the history and ideals of their country.

Even when artists paint primarily for themselves, they want others to see their work and understand and enjoy it. People enjoy paintings for a number of reasons. Many viewers take pleasure in the artistic qualities of a painting, such as its colors or composition. Some paintings interest viewers because of the way the artists have expressed some emotion, such as fear, grief, happiness, love, hero worship, or faith. Such paintings, in turn, can inspire similar emotions in people looking at them. Other paintings are enjoyable because they skillfully portray or illustrate the daily lives of people who lived long ago.

Paintings can also teach. Some paintings reveal what the artists, their patrons, or their society felt about important subjects, including death, love, religion, and social justice. Many paintings tell about the history of the period in which they were created. They provide information about the customs, ideals, and interests of people of past societies. Much of our knowledge about prehistoric and ancient times comes from paintings and other works of art because many early cultures left few or no written records. For example, paintings can tell about such things as the architecture, clothing, recreation, and tools of a particular society or historical period.

1. What does the term fine arts refer to?

2. How has the meaning of the term changed through history?

3. What do decorative arts consist of?

4. How do fine arts and decorative arts differ from each other according to some people?

Write T if the sentence is true and F if it is false.

1.  ____ Fine arts are primarily intended to be useful, morally uplifting, or merely pleasing.

3.  ____ During the Middle Ages, the liberal arts included painting, sculpture, and the performing arts.

4.  ____ In modern times, many people think that only those arts that appeal to the sense of sight are the fine arts.

6.  ____ The distinction between the fine arts and decorative arts is no longer clear nowadays.

8.  ____ People can get not only pleasure but also information from paintings .

9.  ____ Artists paint only for their own enjoyment or self-expression.

10.  ____ We have obtained much knowledge about prehistoric and ancient times from paintings and other works of art.

A. Match the words in the right-hand side with their definitions in the left-hand side.

B. Choose the best word or phrase in the box for each of the following sentences.

1. The ________ "fine arts" has been defined differently in various historical periods.

2. The placement of elements, the ________ style, and the emotional energy within each work differ considerably

3. Representational Art is defined as art which ________ things in the visible world.

4. Some paintings interest viewers because of the way the artists have ________ some emotion, such as fear, grief, happiness, love, hero worship, or faith

5. The ________ focuses on the urban pictures painted by Camille Pissarro in the last decade of his career.

7. Many 'people today believe that only those arts that ________ to the sense of sight belong to the fine arts. 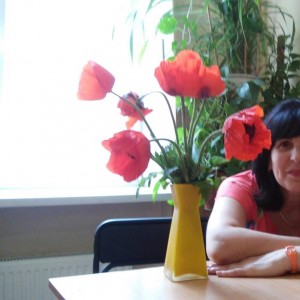