Pupil 1: Good morning, dear guests!
Welcome to our St. Nicholas Party. This night is a great time to get to know the history of this holiday, to sing songs, to play games and have

The Ukrainian pupil: I have to make a project work about St. Nicholas Day. What can I do? I’ve got some information about this holiday. I need the Internet. I think my friend Julia from England can help me. (the pupil is switching a computer)I’m switching on Skype. Julia, Julia, come on. Call me.
Oh, yes! Hello Julia! It’s me (a pupil from Britain appears in front of the Ukrainian pupil)How are you?
Julia : Hi. I’m fine. And you?
The Ukrainian pupil: Life is going it’s usual way. I need some information about St. Nicholas Day. Could you be so kind to help me.
Julia: With great pleasure. You know St. Nicholas Day is celebrated on the
6th of December in Britain.
The Ukrainian pupil: Yes, but we celebrated it on the 19th of December in Ukraine. I know he was a bishop and he liked doing presents. I wonder where he was born, some facts of his life and what not. 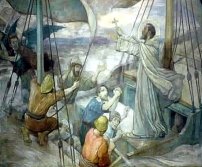 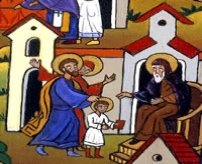 A long time ago, in a country far away, in a town Myra, lived a man who loved God very much. He loved God with all his heart and his neighbors as himself. His name was Nicholas. When he was a boy parents told him about Jesus.
Nicholas wanted to live the way Jesus taught.
When Nicholas was a teenager a terrible sickness came to his town. Many people died including his parents. Nicholas went to live with his uncle who was a bishop in the church. His uncle taught him more about God.
Nicholas' parents were rich and after they died, Nicholas was rich, too. Nicholas decided to do what Jesus said, to "sell all you have and give to the poor."

When he grew to be a young man, Nicholas decided to visit Holy Land. But
his journey home was not without difficulties. A few nights a violent
storm arose and the ship was close to falling apart. So Nicholas cried out to God in prayer. Soon the storm calmed and the waters were
peaceful.


Early one morning Nicholas came to church. Many bishops were there to choose a new bishop. The oldest bishop had dreamed that the first person to come that morning would be named "Nicholas" and he should be the new bishop. At first Nicholas said that he was too young, but the bishops said it was what God wanted. So Nicholas was ordained a bishop in the city of Myra. 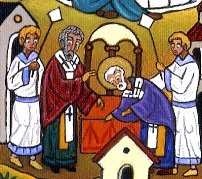 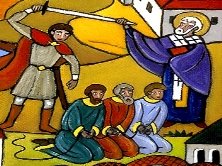 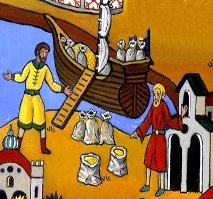 Once it didn't rain for a long time and the ground was so dry crops couldn't grow. There was almost no food and people were hungry. They thought they might starve and die. A ship loaded with wheat came to the city. Bishop Nicholas wanted to buy wheat so everyone would have
something to eat. The ship's captain said he would get in trouble if any of the wheat was sold. Nicholas told the captain it would be all right and not to worry. The wheat fed everyone for two years. And enough was left to plant and bring an end to the famine. Nicholas had saved the
people!
Another time three innocent men were going to be killed for something they hadn't done. When Bishop Nicholas heard about this, he ran to the place where the men were kneeling in front of the executioner. Nicholas grabbed the sword and stopped it and saved the men's lives. Nicholas sent the three men safely on their way. 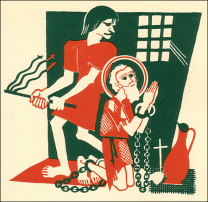 Much later people had different ideas about who Jesus really was. The
Emperor asked all the bishops to come to Nicaea to figure it out. While
they were talking about the problem, Bishop Nicholas got so angry he
lost his temper and slapped one of the men who disagreed! Nicholas was
put in jail and told he couldn't be a bishop anymore. Nicholas was very
sorry for losing his temper and he asked God to forgive him. He was forgiven and made a bishop again. 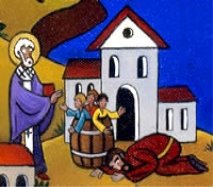 God's love shone through Nicholas and shows us how to follow Jesus and
love and care for others. Saint Nicholas is a friend to everyone -
sailors and fishermen, the innocent,  and, especially, children. 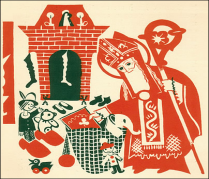 All around the world girls and boys hang up stockings or put out shoes
before St. Nicholas' Day, which is December 6th. When they get up the
next morning, the children run to look in their stockings or shoes,
hoping to find little treats and surprises from St. Nicholas.

The Ukrainian pupil: the stories were so interesting. Thank you.
Now I really understand why people around the world love him so much. By the way do you know a song about St. Nicholas?
Julia :  Of course. Jolly old St. Nicholas.

A SONG
Jolly old St. Nicholas, Lean your ear this way!
Don’t you tell a single soul, What I’m going to say;
Christmas Eve is coming soon; Now, you dear old man,
Whisper what you’ll bring to me: Tell me if you can.

When the clock is striking twelve, When I'm fast asleep,
Down the chimney broad and black, With your pack you'll creep;
All the stockings you will find Hanging in a row;
Mine will be the shortest one, You'll be sure to know.

Johnny wants a pair of skates, Susy wants a dolly;
Nellie wants a story book; She thinks dolls are folly;
As for me, my little brain isn’t very bright;
Choose for me, old Santa Claus. What you think is right.

The Ukrainian pupil : I like this song. And now I’d like to write my list of wishes to St. Nicholas too: a new dress, …
Julia :  Stop, Stop  You are so funny. Do you really need a new dress?
The Ukrainian pupil: Why not.
Julia :  Let me tell you one story about three poor girls. They were the
same age They needed not only dresses, but some money to get married in
future not to become slaves.
ROLE PLAY
Props: Broom, 2 small "oranges," bouquets of flowers (tiny dried flowers
work well), money bag, table, 2 pallets.
Characters :
The Bilir Family
ADA, 14 years old
OLIVIA, 16 years old
IDA, 12 years old
MOTHER
FATHER
NICHOLAS, a young seminarian
JOHN, Nicholas' colleague
MRS. SAHED, an unsympathetic neighbor

SCENE ONE (Inside Bilir home; table near front of stage.)

ADA: [Moves in back stage humming and sweeping; looks up at audience.]
Oh, hi! How are you? By the way, my name is Ada Bilir. Any other Ada's here? Well, I want to tell you the story of my family. Let's see, there's my older sister, Olivia and my younger one, Ida. That makes three girls in all. Then we have a mother and a father. We live in Myra, a small village in Turkey. We have a pretty normal family, except we are very, very poor. And folks who are poor always have a rough time. But in Turkey in the fourth
century, things are really rough because if parents don't have some
money or jewels for their daughters, no one will marry them! Then the
girls will have to become slaves. [Shuddering] Oh-h-h. I wouldn't want
to be a slave, would you? Uh-uh! [Shaking head] Not me. No way. But
that's what is going to happen to Olivia, Ida and me because we don't
have money or jewels. Our parents are so worried! What are we going to do? What can we do? [Moves back a bit and resumes sweeping.]
IDA: [Runs in carrying two oranges.] Ada, Ada! Guess what! I found two
oranges today and they're only a little bruised. Aren't they wonderful?
[Puts oranges on table.]
ADA: [Moves forward to table.] I'm proud of you, Ida. But, little
sister, we need more than that to eat tonight. Maybe Olivia also had
luck and sold some flowers to the rich people in the village. Let's go
find her. [Puts broom in corner.]
IDA: I'll bet I know where she is. Come on. [Pulls her sister toward
offstage "door" as Mother comes in wearily.] Oh, hello, Mother. We're
going to find Olivia. Be back soon.
MOTHER: Fine, girls. But don't be long. [Girls leave.] Now how shall I
feed the family tonight with only a small piece of bread? [Notices
table.] What's this? It looks like Ida has been out looking for food
again. Well, at least we will have a bit to eat tonight. [Knock at the door.]
MOTHER: Yes? Oh, come in, Mrs. Sahed. How are you today?
MRS. SAHED: [Bustling in] Terrible, Mrs. Bilir, just terrible! My back!
I cannot take a step without pain. No one suffers like I do! [Notices
oranges.] My goodness, fruit! And only a little bit rotten!
[Sarcastically] Well, you will certainly have a feast tonight, huh?
MOTHER: Yes, that's Ida's doing.
MRS. SAHED: Lovely daughters, you have. Of course, who needs daughters?
Now, my sons. . . ,
MOTHER: They're good girls and. . . .
MRS. SAHED: But they are girls. And you and your husband have enough
problems without having three daughters.
[Mother picks up broom and begins sweeping with her back to Mrs. Sahed.]
MRS. SAHED: Now don't you ignore me. I know the story. There is no way
your poor husband can earn enough money for those girls of yours to have
dowries. No way!
MOTHER: Please. . . .
MRS. SAHED: You have to face up to it. Your daughters have no dowries—no money, no jewels. Nothing! So no one will marry them. Olivia is already sixteen—time for her to leave home. You must know that you will have to sell her into slavery.
MOTHER: [Angrily] That's enough! There are plenty of problems without
your reminding us. Now, I must fix dinner.
MRS. SAHED: I'm just trying to help. After all, plenty of girls end up
in slavery because they are too poor to get husbands. But I can tell
when I'm not wanted. [Turns jerkily and strides out.]
[Mother puts her head down over her hands on broom and shakes as if
crying.]

The Ukrainian pupil: the story was great and it had the happy end.

Now I’d like to listen to different poems about St. Nicolas. Do you know any?

Tonight when it is dark
Saint Nicolas may come.
He loves to bring a big surprise.
He gives the children toys.

Santa Claus is round and plump;
St. Nicholas is tall and thin.

Santa Claus flies through the air—from the North Pole;
St. Nicholas walked the earth, caring for those in need.


Julia:  I don’t understand the lyrics of the song but I like the music.
Now you  are able to make up a project. Do your best.

the Ukrainian pupil : Thank you. Bye